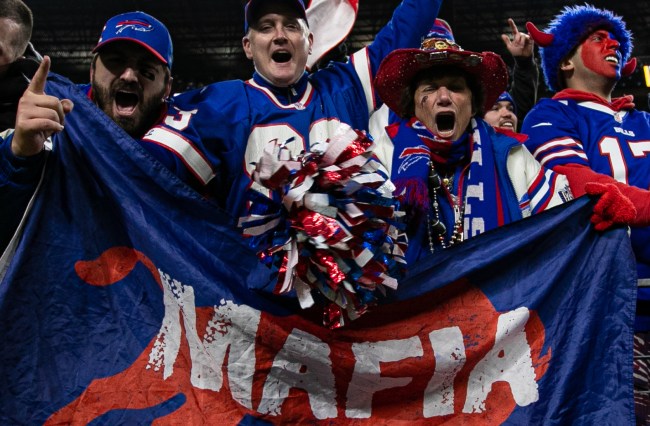 The Buffalo Bills kicked off the 1990s by representing the AFC in the Super Bowl for four consecutive seasons, and while it’s safe to assume most of their fans would’ve preferred to see them walk away with one of the zero Lombardi Trophies they managed to secure during that streak, I’d argue rooting for a team that repeatedly crushes your hopes and dreams is better than supporting one that gives you little reason to believe in the first place.

Unfortunately, that was the kind of franchise the Bills transformed into when the new millennium arrived after finding themselves sharing a division with a Patriots team helmed by some guy named “Tom Brady,” as Buffalo went 17 years without a playoff appearance until finally snapping the streak a few years ago—much to the delight of a fanbase that had also transformed over that span into the loveable group of misfits dubbed “Bills Mafia.”

Bills Mafia and the companies that produce the portable surfaces they’re so fond of launching themselves through were recently hit with a major blow after the team announced it will be playing its first two home games in the absence of fans. However, if you thought that was going to stop them from donning their finest Zubaz and wreaking havoc on gameday this September, you obviously don’t know Bills Mafia very well.

According to TMZ, fans might still be able to participate in their sacred rituals in a responsible(ish) manner courtesy of MyBookie, which is currently giving people the chance to register for the opportunity to earn a spot inside a tailgate “bubble” it says will give lucky members of Bills Mafia access to all of the essential amenities while ensuring the experience is as safe as any event advertising a van specifically designed for people to jump off can be.

When you consider the seemingly uninsurable nature of the kind of gathering organizers are promising, there’s no telling if this will actually come to fruition, but something tells me the lack of an officially sanctioned space isn’t going to prevent people in Buffalo from treating us to the videos of the various shenanigans that have become a Sunday tradition when the home opener is played on September 13th.