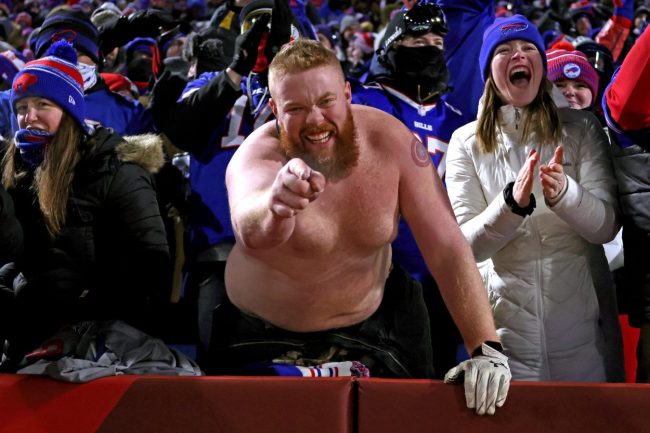 Buffalo Bills fans are known for their innate ability to smash tables better than anyone else in the world. No matter the time, the place, or the weather, Bills Mafia is always going as hard as possible for their team.

Last year, after kicking cancer’s ass, a member of the Mafia celebrated by jumping through a table. That came just days after Bills fans celebrated an AFC Championship birth by jumping through a flaming table in the middle of the street, just weeks after doing the same to celebrate a first round playoff win. Quarterback Josh Allen even promised to do the same if Buffalo won the Super Bowl.

The tradition has carried into 2021 and Bills Mafia began the year by jumping through a flaming table in Miami. Needless to say, it’s a tradition.

Thus, as Buffalo fans geared up to cheer on their team in one of the coldest games in NFL history, there was only one way to get pumped—

Jumping through a table, duh.

Prior to kickoff, an overall-clad fan performed the most perfect table smash of all-time. His form was remarkable.

After climbing atop a small trailer, the fan put what appears to be a whole bottle of champagne aside before walking to the edge. From there, he went full-send.

The fan sprung off of the trailer and into the air with a strong, powerful leap. As he reached the peak of his jump, he tightened up to an almost perfectly straight board, lowered his shoulder and braced for impact.

Upon making contact with the table, he could not have hit it any better. He landed perfectly in the middle, snapped the table in half, stood up without hesitation and sent the crowd into a frenzy.

Bad day to be a table

There may have been crazier, more exciting table smashes in the past. However, there has never been a member of Bills Mafia to launch his or herself through a table with better form. What a remarkable performance.