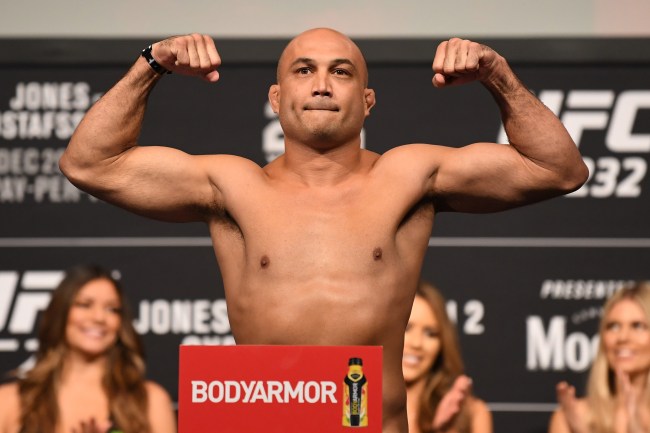 Last week, footage went viral of UFC Hall of Famer B.J. Penn getting knocked out cold by some random chubby dude outside of a bar in his native Hawaii in late August.

It was a stunning sight to see, considering Penn is a multi-division champion and the first American Gold medalist of the World Jiu-Jitsu Championship. Granted, he’s lost a record seven straight matches on the tail end of his career, but it’s hard to imagine anyone even daring to fuck with Penn, never mind knocking him out cold.

The 40-year-old UFC legend recently told TSN his side of the story, which makes him look like a lover, not a fighter.

“I’m at a concert going to meet a friend that I’ve known since we were really young kids and I’m over there and an acquaintance of mine, he gets mad about something, you know something was said or it was an old past thing and then he wants to fight about it,” Penn told TSN’s Aaron Bronsteter.

“I was like, ‘no, no, I don’t want to fight, we’re friends, everything is cool.’ He even walks outside and I’m thinking, this is silly I’m going to go get him, calm him down and get him to come back inside and enjoy the concert, we’ve got some other friends there.  I walk outside to go give the guy a hug and then he hits me twice and I’m like no, calm down.  I try to give him another hug and he hits me a couple more times and he hits me again.”

Penn says that’s when things took a turn for the worse.

BJ Penn gives his side of the story of what took place in videos of him in an altercation released recently by @TMZ.

“The last thing I want to do is get into any type of trouble, my custody case, me seeing my kids depends on all this stuff"

“Whoever put that video up cut it in half, I wish they had the whole thing that showed me trying to hug the guy.  Finally my adrenaline picked up because he was hitting me so much so I said go ahead and hit me again, really I thought the guy would eventually just say forget it BJ, whatever, walk away, but he hit me and he hit me good and knocked me down and then when I got back up he tried it again and I just had to defend myself and that’s what you see in the second video.”

This is not the first time Penn has been caught on video fighting someone outside of the Octagon.  In June another video showed him in an altercation outside of a strip club.

“There was another video on TMZ of me holding somebody on the ground,” Penn said.  “I’m in the middle of a custody case right now and from that last one I already got a lot of flak from the custody evaluator, from their lawyer of course, from my lawyer.”

“The last thing I want to do is get into any type of trouble, my custody case, me seeing my kids depends on all this stuff and it’s just really strange how things just happen and you never see this kind of stuff, but here I am in a custody case and this happened twice.”

Penn is slated to fight professional fighter Nik Lentz in a match that was reportedly scheduled for October, but Penn says he needs more time to prepare and is working with the UFC to push the fight to November.