BKFC 27: Top 5 Storylines To Look For At BKFC’s Debut In London 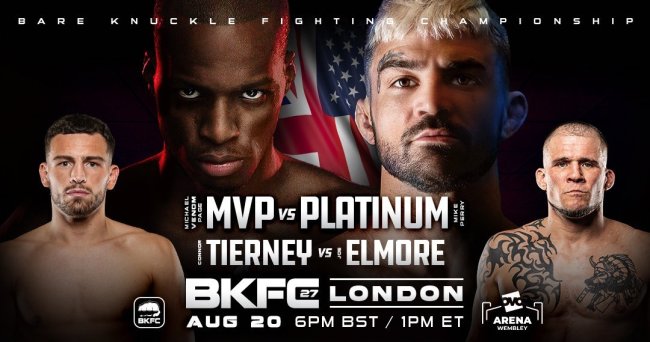 BKFC 27 will debut across the pond in London on August 20th. It’s a clash between the Americans and British for arguably the promotion’s biggest fight card yet.

A potential ‘Fight of the Year’ with Michael “Venom” Page and “Platinum” Mike Perry headlines the night, but it’s not the only fight worth paying attention to. While Paige VanZant’s bout against Charisa Sigala has been rescheduled, rising BKFC star Connor Tierney will still appear on the card.

So no matter who you’re cheering for in this USA vs. UK face-off, just know it’s going to be a good one. With less than a week to go, here are 5 storylines to get you hyped for BKFC 27.

1. Michael ‘Venom’ Page will make his BKFC debut after Bellator allowed him to sign a one-fight deal.

For those new to combat sports, MVP is a current Bellator title contender in the welterweight division. Despite still being under contract to the MMA promotion, he was given permission to sign a one-fight deal with the BKFC.

With only two losses total in his career, MVP is recognized as an incredibly talented striker. The British mixed martial artist, who most recently lost in Bellator 281, will make his BKFC debut against former UFC veteran Mike Perry.

Perry joined BKFC in 2021, debuting earlier this year with a victory at KnuckleMania II. As the first BKFC-Bellator crossover fight, this has the potential for ‘Fight of the Year.’ So if there’s one fight you don’t want to miss during BKFC 27, it’s this one.

2. BKFC debuts in London For The First Time Ever

As the fastest-growing combat sport in the world, BKFC has hosted successful promotions in the United States, Mexico, and Thailand. Now they’re making a highly anticipated European debut by traveling across the pond.

The UK has been a long-awaited destination for the bare-knuckle fighting promotion and it’s finally happening this weekend at OVO Arena Wembley in London. With several proud British fighters fighting in front of a home crowd, it’s setting up to be an exciting weekend.

Connor Tierney has his eyes set on Joe "The Hitman" Elmore at BKFC 27 London! https://t.co/HLL6nJslEV pic.twitter.com/jUQSVFPx4Q

3. Connor Tierney eyes the welterweight belt with a win at BKFC 27.

The “Bum Town Bomber” considers himself as combat sports’ next breakout star. Like other MMA superstars, Tierney lets his words fly, even calling himself the world’s greatest bare-knuckle boxer.

Sporting a 6-1 professional record, he’ll look to improve upon his 1-0 BKFC record in front of a home crowd at BKFC 27. Despite only having one fight under the promotion so far, Tierney has already called out his division’s champion, Luis Palomino.

Should he defeat Joe “Hitman 187” Elmore this weekend, the rising star will hope for a bigger opportunity in the future. But if he truly wants that title shot, he’ll have to deliver a spectacular performance on Saturday.

Goodjohn is considered one of the BKFC’s most dangerous lightweights. Although he ultimately fell short against champion Luis Palomino last year, he made history doing it by becoming the first British BKFC fighter to compete for a title.

This weekend, he’ll look to bounce back against fellow countryman James Lilley, as he returns home for BKFC 27. Lilley is the no. 3 ranked lightweight contender and is coming off a first-round knockout win earlier this year. So even with friends and family in the crowd, this fight won’t be easy for Goodjohn.

The biggest BKFC event in history is coming to you live from London, England on Sat. Aug 20th! Watch live on ALL BKFC streaming devices starting at 1PM EST.
Only $4.99 | Order Here: https://t.co/7vd3KkXs90 pic.twitter.com/zDfvwLKLKs

5. Jake Bostwick predicts an early knockout for his fight against Chris Fishgold.

While the matchup between Jake Bostwick and former UFC veteran Chris Fishgold may not be the most high-profile fight on the card, but it could be the most exciting.

In the lead-up, Bostwick gave his prediction for what will come: “Me and Fishgold is going to be a bit of a car crash. I think it’s going to end early, by KO.”

With predictions like that, fans are in for a treat. Add on the other four storylines and it’s no wonder BKFC 27 is the biggest event in the promotion’s history.

History will be made when BKFC debuts in London. So tune in Saturday at 10 AM PDT for the prelims and 11 AM PDT for the main card to see how these storylines play out at BKFC 27.