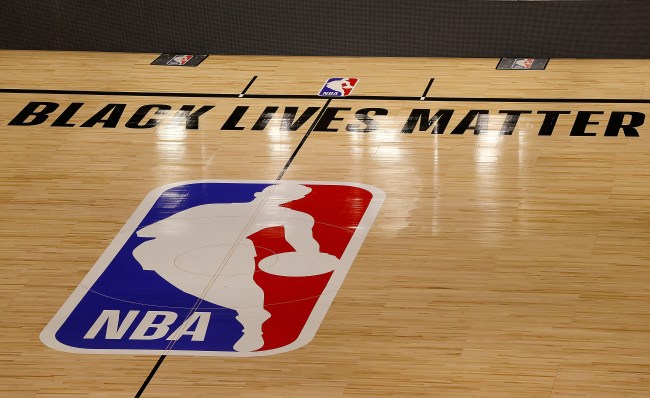 NBA media members covering Saturday night’s Lakers-Rockets game had trouble getting back to their hotel after being blocked by Black Lives Matter protesters who were looking from help from LeBron James.

A small number of protesters carrying signs and shouting into megaphones blocked at least two buses chartered by the NBA from briefly from entering the Walt Disney World campus on Saturday night, with the group saying it wanted LeBron James, Russell Westbrook and other top players to take notice.

The group blocked charter buses carrying members of the news media and some NBA staff, but no players or team personnel. Among their chants: “Black Lives Matter” and “LeBron can you help us?” Some also carried signs with messages such as “Russell Stand With Us.”

The protesters assembled near one of the entrances and were not inside the so-called bubble, where teams, NBA staff and other have been for more than two months in some cases for the resumption of the season. They appeared to have gathered on a road that is open to the public, then stopped buses on an access road near a primary entrance to the resort.

#BLM protest outside the media bus on way back to the hotel blocking bus. pic.twitter.com/4r6EsKwitP

The protesters are seeking justice 22-year-old Salaythis Melvin, who was fatally shot by an Orange County sheriff’s deputy last month and believed the bus was filled with players.

In the latest episode of Life in the Bubble, our media bus has been stopped by protesters against the Orange County Sheriffs dept against the killing of Salaythis Melvin. The protesters thought our bus was filled with NBA players. #BlackLivesMatter pic.twitter.com/mZbfwuCBWs

A group of protesters are blocking the media bus at the NBA Bubble entrance. The driver is calling for cops and sheriff’s deputies. “What do we want? Justice!” pic.twitter.com/nDAc0Y9gWT

A group of protestors at the NBA Bubble are seeking justice for Salaythis Melvin. Media bus is stopped at the cross section of Coronado Springs & Buena Vista Dr. pic.twitter.com/rbvOiHDDQh

A protest in The Bubble blocking bus filled with league staff and media. Waiting on sheriff to arrive. pic.twitter.com/dqOK6UgVcu

One protester could be heard through the glass: “We want you to use your platforms…”

(As an aside, the notion of getting off the bus and walking the short distance to our rooms was a non-starter because it would have meant a bubble breach – and lots more quarantine) https://t.co/W70lD9NMP3