Bo Nix In Talks With An SEC West School, Says The Coach Is ‘Trying’ To Communicate With Him 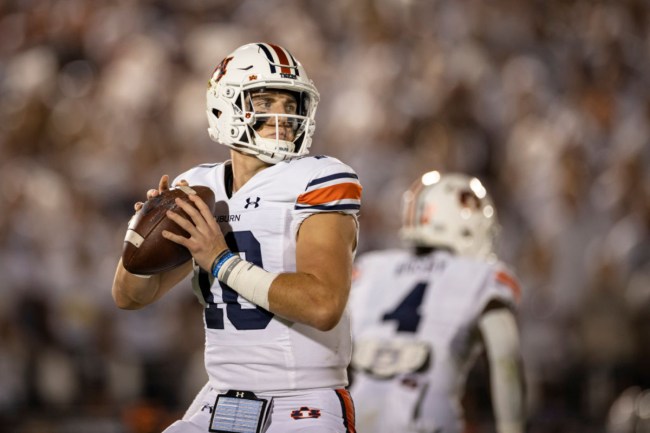 Bo Nix entering the transfer portal was a bit of a surprise. He is the son of a former Auburn quarterback and was a three-year starter for the Tigers.

Nix, who graduated in just three years, seemed destined to finish his college career as a Tiger, but ultimately decided to take advantage of the new-look college football world and take his talents elsewhere.

Nix is a very experienced quarterback with a strong arm and the ability to get the job done on the ground as well. Plenty of college football fans pointed to Ole Miss and Lane Kiffin’s offense for a solid landing spot for the former five-star recruit and that may become a reality.

Nix joined ‘The Next Round‘ and specifically spoke about Ole Miss and Kiffin showing interest in him coming to Oxford.

While he said he hasn’t talked directly to Kiffin, he has exchanged text messages with him amid Ole Miss’ Sugar Bowl prep.

“Well, I have not spoken on the phone with coach Kiffin, I have texted him,” Nix said. “They are in the middle of Sugar Bowl practice so he is pretty busy. He is obviously trying on his end but he is trying to win a game, too.”

Nix’s “he is obviously trying on his end” comment is an interesting one and may come across with a touch of arrogance, but there may not be another way for him to describe the situation. He’s exchanged texts with the head coach and in his mind, Kiffin is trying, there’s no real other way to say it.

As far as what “trying” actually means, well we don’t know that just yet. Is Kiffin simply trying to set up a call or for Nix to come on a visit, or is Kiffin trying to get a feel for Nix in order to offer him a roster spot?