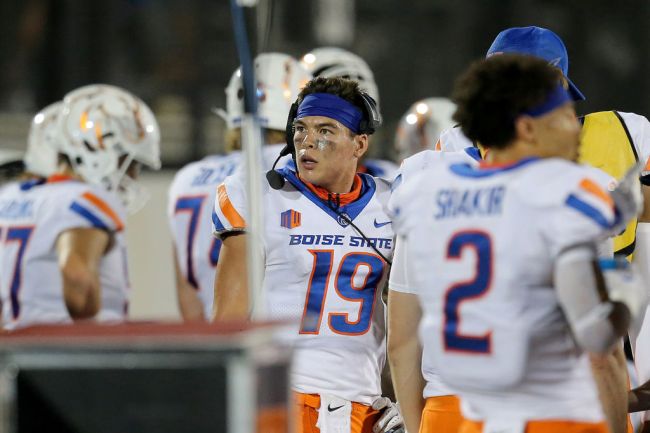 Boise State quarterback Hank Bachmeier had himself an eventful evening. The Broncos traveled to the Bounce House in Orlando to take on the UCF Knights to open their season on Thursday.

Kickoff was scheduled for 7:00 p.m. EST, but a more than two hour weather delay pushed the start time back to 9:45 p.m. EST. Heavy rain and lightning rolled through central Florida and sent the teams back to their locker rooms.

Boise State is on Mountain Time, so when the game was delayed, it was about 5:00 p.m. MDT. While the rest of his team passed the time by going through last minute adjustments, listening to music and chopping it up, Bachmeier decided to go to class.

During the rain delay, the two-time Academic All-Mountain West player hopped on Zoom and joined his evening class— wearing his uniform, eyeblack, headband and everything.

The junior from California has seen some solid success when he has been on the field over the past few seasons. In 14 games played in 2019 and 2020, Bachmeier completed 62.5% of his passes for over 3,000 yards and 15 touchdowns.

A tough finish to a confident night.

He got off to another strong start on Thursday and connected on 25 of 39 attempts for 263 yards and two touchdowns. His one interception, however, cost the Broncos the game.

With just over two minutes left, Boise State had the ball in opposing territory on 3rd-and-4 and faced a five-point deficit. Bachmeier rolled out to the right and had the opportunity to scramble for a first down.

Instead, he threw a pick to ultimately seal the loss.

It was a strange night for Bachmeier and it ultimately ended in a long, disappointing trip home.