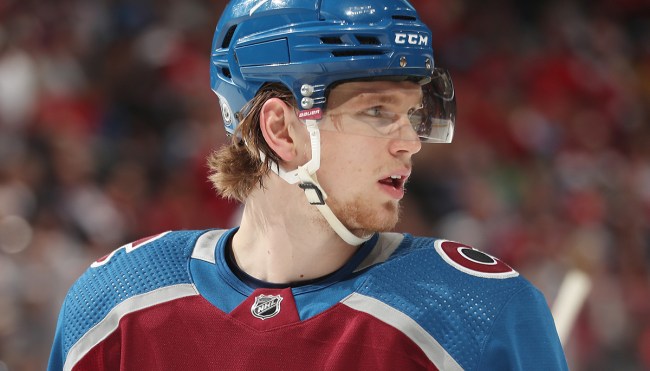 On Thursday, hundreds of thousands of people flocked to downtown Denver to watch the Colorado Avalanche parade through the streets of the city along with the Stanley Cup the team recently lifted for the first time in more than 20 years.

If footage from the celebration is any indication, it seemed to be worth the wait, as the day produced a number of memorable moments—like Erik Johnson instructing a loyal legion of fans to belt out Blink-182’s “All The Small Things,” which became the team’s unofficial anthem this season.

Now, some of those moments may be slightly less memorable for players like Mikko Rantanen who may have been, um, overserved over the course of the day (although I’d argue there’s no better sign that you had a very good time than temporarily losing your ability to speak a second language).

Mikko Rantanen says the parade has warped his ability to speak any English, so he plans to only speak to fellow Finn Artturi Lehkonen the rest of the night.

It would appear Avs defenseman Bowen Byram also enjoyed the festivities, as the 21-year-old occasionally hopped off the fire trucks that were ferrying the team around to get up close and personal with the fans lining the parade route.

He also treated us to one of the more amusing moments of the day, as Byram was temporarily stopped by a police officer who assumed he was a random dude who’d jumped over the barricades. Thankfully, he was able to clear up the confusion with the help of some spectators who yelled “He’s a player!” before rejoining the rest of the team.

A Denver police officer didn’t know who Bowen Byram was.🤣

Part of me is convinced that interaction was really an elaborate guerilla marketing campaign orchestrated by Coors Light, but I can’t even be mad if that’s actually the case.