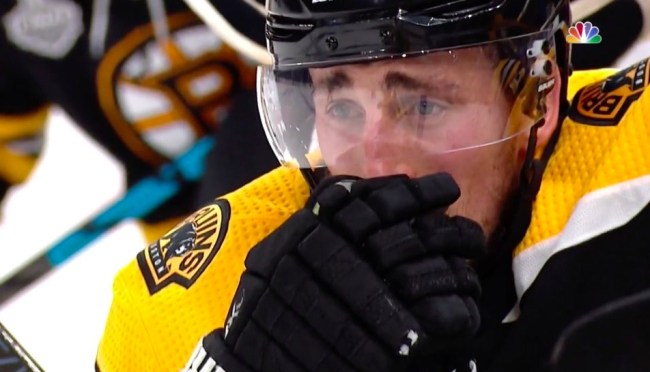 “By far,” was Brad Marchand’s response when asked if the Bruins Game 7 loss in front of a home crowd was the most painful of his decade-long NHL career. The controversial left winger has always been one of those Patrick Beverley-type players, the undersized overachievers who you hate if he’s your opponent but cherish if he’s on your team.

Last year, the NHL had to ask Marchand to stop licking players after he appeared to lick Maple Leafs Leo Komarov’s face. Marchand defended his actions by saying that he thought Komarov “wanted to cuddle.” This incident is the perfect microcosm for Marchand’s pesky and petulant career.

On top of the devastating loss, Marchand will likely be playing a particular incident on loop in his head for a long time to come. With 10 seconds left in the first period, Marchand inexplicably left the ice for a line change with the Blues on the attack, and two seconds later, the Blues scored to take the 2-0 lead.

After the 4-1 loss, Marchand was captured crying as his opponents celebrated their first Stanley Cup victory in franchise history.

A lot of people will probably want me to make this, so here's Brad Marchand after losing the Cup. pic.twitter.com/dfIS640Sd8

The entire hockey world, and even people who just popped in to relish in a Boston team losing, did not have any reservations about twisting the knife on a heartbroken Marchand.

love to see it

Marchand crying is what dreams are made of 😂🏒🏆 pic.twitter.com/ePxm1okPln

Literally everyone when Brad Marchand was seen crying on TV pic.twitter.com/1ufxiihWto

Brad Marchand has absolutely LOST IT outside TD Garden pic.twitter.com/yB5TCpMy6N

Brad Marchand fighting the refs in the parking lot after game 5: pic.twitter.com/99xhP5k7De