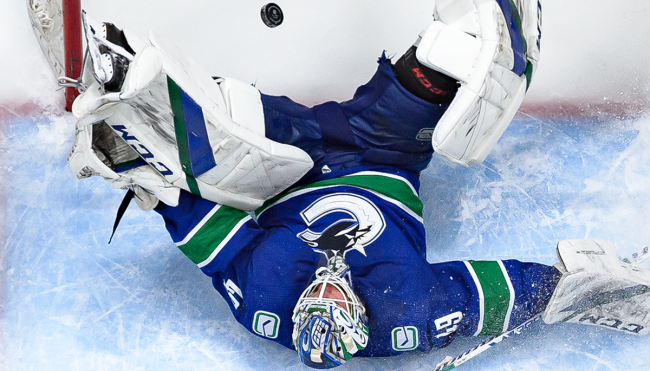 The internet has long been a place where words go to die at the hands of the hyperbole that’s capable of making their original definition become increasingly meaningless at an impressive pace.

There is perhaps a no better example of one that befell this fate quite like “literally,” which was bastardized to a point where it means the exact opposite of what it once did. You also have “OBLIDERTATE” and every other adjective used to describe literally any video involving Jon Oliver and, of course, “epic,” which used to apply to three-hour movies about historical events featuring thousands of actors and elaborate sets but is now harnessed whenever someone adds bacon to a dish that usually doesn’t feature it.

I’ll admit I’ve been guilty of these transgressions on more than a few occasions, but I promise you I am not exaggerating when I say I’m being entirely serious by describing what you’re about to see as one of the best saves in the history of hockey

In 1996, Mike Legg raised the bar for the wildest way to score during the NCAA Tournament where the Wolverine introduced the world to what was dubbed “The Michigan,” a lacrosse-style goal that wasn’t scored in an NHL game until a couple of years ago.

Goaltenders don’t really have the luxury to purposefully put themselves into a position to pull off similarly crazy feats, and in a lot of the cases where they do manage to make a mind-blowing save, they were only forced to do so after misplaying the puck before scrambling to treat the world to the ensuing insanity.

That was not the case with Canucks goalie Braden Holtby, who found himself staring down a breakaway courtesy of Toronto’s Wayne Simmonds on Sunday. He did manage to get his paddle on the puck before Simmonds got off a shot, but it looked like it was still going to make its way into the goal until Holtby rectified that problem by standing on his head with the kick save to end all kick saves

AROUND THE WORLD
WHAT A STOP BY BRADEN HOLTBY! #Canucks
🎥 @Sportsnet pic.twitter.com/M9AwqHmnto

I think it’s going to take more than one shower to wash off that kind of filth.