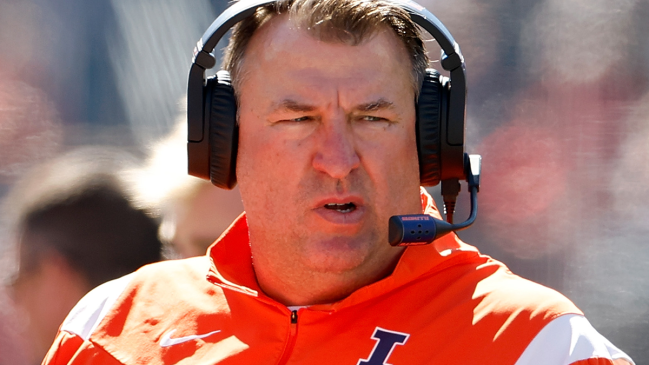 It’s safe to say press conferences and interviews with football coaches can be very hit or miss when it comes to the amount of information and entertainment you can expect to derive from their interactions with the media.

While it’s virtually impossible to quantify, most coaches (and, in turn, most of their exchanges) seem to be rooted in the tried-and-true “Repeat Slight Variations of the Same Tired Clichés” approach that can be tracked using a Bingo card filled with phrases like “One Game At A Time,” “Left It All On The Field,” and “They’ve Got A Good Program Over There.”

However, there are plenty of exceptions.

Over the years, Mike Leach has firmly established himself as The Wild Card of college football coaches thanks to his tendency to go on long-winded diatribes concerning everything from his love of cargo shorts to his undying and visceral hatred of candy corn.

He might be a hard man to top, but that doesn’t mean plenty of others are able to get in on the action every now and then—including Illinois skipper Bret Bielema.

The Fighting Illini headed into the season with their win total set at 4.5, and it’s safe to say anyone who bet on the over is pretty happy with the performance of a team that’s currently sitting at 4-1 after a decisive 34-10 over Wisconsin that contributed to the firing of (now former) Badgers head coach Paul Chryst.

The team’s defense is currently the third-best in the country by virtue of allowing an average of just 229.2 points over the course of five games, and during a press conference, Bielema summed up why that’s the case with a comparison involving Golden Corral.

"Our kids, it's like their @goldencorral 24/7, they just want to eat man"#Illini head coach Bret Bielema says his defense and team is hungry for more success. Maybe a Golden Corral NIL deal? Especially for the offensive and defensive lines… pic.twitter.com/LONrwdCwKR

If Golden Corral knows what it’s doing, it will sign every single member of the Fighting Illini defense to an NIL deal and make a video where they all spend 24 hours inside one of its locations so we can see how much damage they can actually do.

That one’s free, Golden Corral’s marketing team. The next one will cost you.