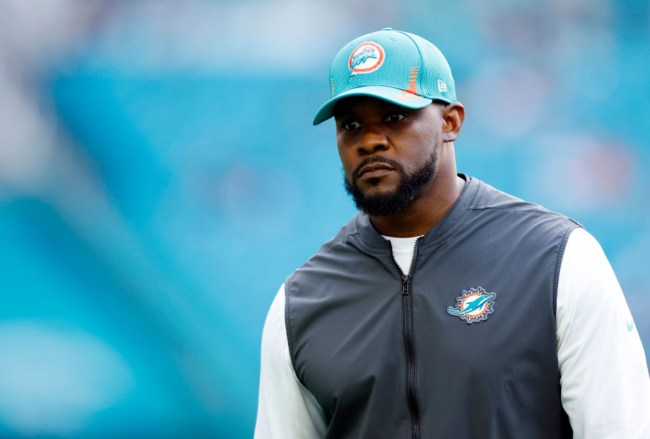 The Miami Dolphins made the decision to part ways with third-year head coach Brian Flores after this season’s 9-8 performance. When originally announced, the news came as a bit of a shock to those around the NFL as the Dolphins successfully turned things around after a 1-7 start, narrowly missing out on the playoffs.

This week, details surrounding the firing have begun to arise. There appears to be a tiff between Flores and young quarterback Tua Tagovailoa. And Miami management opted to side with their signal caller as opposed to their head coach.

Reports are surfacing noting that Flores was not thrilled with Tagovailoa’s work ethic, referring to it as flat out “sh-tty.”

The Dolphins’ leader was unhappy to see his star passer on the golf course rather than in the film room on his days off. But when it came time to make a decision on the future of the organization, Miami stuck with Tagovailoa despite Flores leading the Dolphins to 19 wins over the last two seasons.

According to Miami insider Marcel Louis-Jacques, the choice was never “football related.” Miami was forced to pick sides and they doubled down on their first-round selection. When asked about the move to let Flores go, owner Stephen Ross skipped through any offensive or defensive strategy. There was no discussion of what could be done to better the product on the field.

In fact, it was much of the opposite. Ross commended the Dolphins’ current roster, noting its “exceptional” talent. What he did mention, though, was the fact that Miami was not collaborating and “working well as an organization.” There was a disconnect between the team’s leader and those on his staff.

What’s wild about the relationship between Flores and his team is that he essentially stopped all communication around Thanksgiving. This coming with a month and a half remaining in the year, in the midst of a winning streak and playoff run. The Dolphins ended the season on an 8-1 run despite Flores’ assistants allegedly not “knowing what was going on.”

With these reports continuing to surface, it’s no wonder management moved on. Flores is now being connected to the Houston Texans’ opening. The Dolphins will move quickly to fill their head coaching vacancy in the coming weeks.