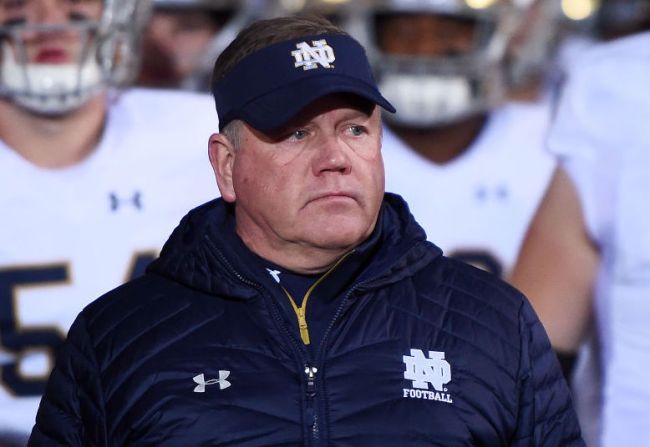 With a win over Clemson on Saturday, Notre Dame will have punched its ticket into the College Football Playoff, but if families aren’t allowed to attend then the Fighting Irish may just skip it.

No, seriously, that’s exactly what head coach Brian Kelly said according to Brett McMurphy of Stadium.

The Notre Dame head coach was asked about the possibility of his team making the CFB Playoff without fans being allowed to attend and instead of saying he’d just be happy to compete for a shot at a national championship, he legitimately said his squad may not “play in the Playoff if families can’t be there.”

Notre Dame’s Brian Kelly about possibility competing in a @CFBPlayoff game w/no fans: “I’m not sure we’d play in the playoff if families can’t be there.”

I get that Kelly is trying to say that he wishes fans could attend the Playoff and obviously wants family members in the stands, but this is a pretty poor way to express that. He’s obviously not serious here, if he was, Notre Dame would fire him in an instant and he’d likely never coach college football again. It’s a sarcastic comment from him, and a pretty poor one.

Let’s say Kelly actually is being serious though. If that’s the case, Texas A&M would very happily take Notre Dame’s spot in the Playoff.

Families, at the very least, should be able to attend the Playoff games. The majority of the players will never play in a more meaningful game in their careers, plus there’s a way to safely have family in attendance. Kelly could’ve answered the question with a statement similar to the one you just read, but instead, he wanted to set an example or something.