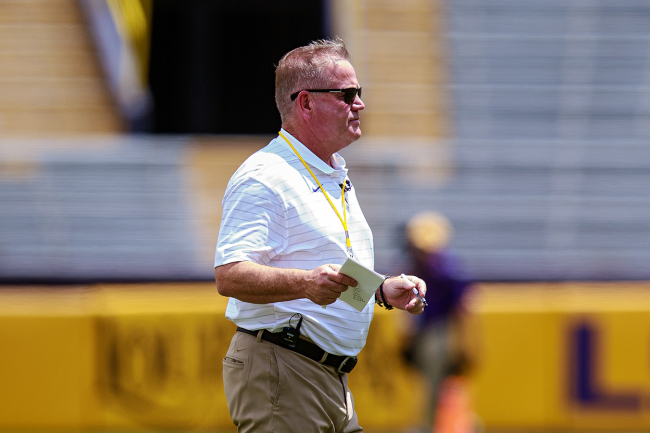 Almost immediately after being named the head football coach at LSU, Brian Kelly went viral for all of the wrong reasons. There was all kinds of speculation about his departure from Notre Dame, which he recently reveled was in part because he wants to beat one SEC legend, and then he started dancing.

At first, Kelly danced very awkwardly with his new five-star quarterback commit Walker Howard. And then he was grinding on a recruit who ended up signing with Alabama. Not long thereafter, he tried to hit ‘The Griddy’ and it did not go well at all.

Kelly has previously addressed the video with Howard in the past and said something along the lines of “if your five-star quarterback asks you to dance, you dance.” Basically, in so many words, he said that he was at the mercy of a high schooler who he wanted to commit to his program.

And now he is doing it again.

During a recent conversation with Jaques Doucet, Kelly addressed the Howard video for the first time in an interview setting.

Brian Kelly, once again, sounded pretty desperate and admitted that he would not have done the dance with Walker Howard if he was at Notre Dame.

“I would not have done that at Notre Dame. It’s just a different place, a different time. I’ve always kind of looked at my situation and said I think as a leader, you’ve got to always shift and change and look to improve and sometimes, reinvent yourself. I don’t know if I’ve reinvented myself in all those areas.

“But when a young man looks at you and says, ‘Coach, let’s have some fun with this,’ why not? I think sometimes, we get a little too caught up in what other people think instead of the people that are asking you to do some things. I had some fun with it, and I’m glad I did.”

Credit to Kelly, to some extent, for owning it. He is glad he had some fun with it.

What he is saying is pretty hilarious though. Kelly is saying that he has to “shift and change” at a different place at a different time. It sure sounds like Kelly was desperate to land a five-star quarterback and was at Howard’s mercy for whatever he wanted so long as he committed.

Hopefully, for sake of content, Kelly continues to dance with recruits. It’s so, so funny.