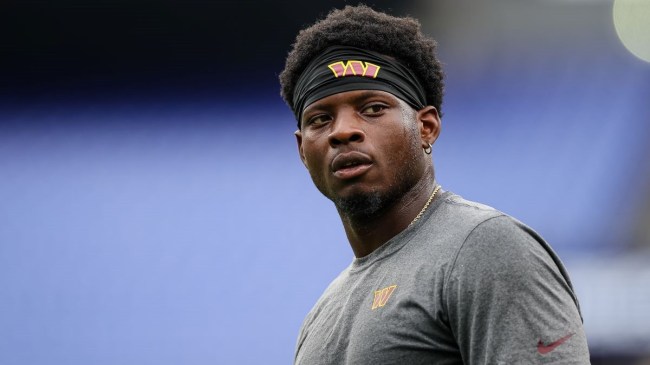 Alabama product Brian Robinson has had a remarkable rookie season in the NFL. Sure, the numbers may not reflect that. Robinson has carried the ball 67 times for just 219 yards and one touchdown and the Washington Commanders sit at the bottom of the NFC East. But Robinson’s story goes far beyond any box score.

The Commanders selected the 6-foot-1, 225-pound back in the third round of the NFL Draft. But before he could even take the field for an NFL game, Robinson’s life came under threat.

The rookie was shot twice in an attempted carjacking in Washington D.C. in August. Miraculously, he returned to the Commanders’ practice facility just days after the incident and was practicing with the team just weeks later.

Robinson made an emotional return to the field on Oct. 9 when he made his first-career NFL appearance against the Tennessee Titans.

The story is nothing short of incredible. But now Robinson’s agent is condemning the Commanders after the organization used Robinson’s near-death experience to deflect from an ongoing investigation into the team.

The office of D.C. Attorney General Karl Racine announced Wednesday that he will hold a 1 p.m. news conference Thursday to “make a major announcement related to the Washington Commanders.”

It didn’t take long for Washington to respond to that news. The team issued a statement of its own just hours later and used Robinson’s story to deflect from the news.

“Less than three months ago, a 23-year-old player on our team was shot multiple times, in broad daylight,” the statement began. “Despite the out-of-control violent crime in DC, today the Washington Commanders learned for the first time on Twitter that the D.C. Attorney General will be holding a press conference to ‘make a major announcement’ related to the organization tomorrow.”

Many were quick to criticize the Commanders’ obvious deflection. One of those critics was Robinson’s agent, Ryan Williams.

Up until an hour ago, the Commanders handled the Brian Robinson situation with so much care, sincerity and class. And I was so grateful for all of it.

Although I know that there are some great humans in that building, whoever is hiding behind this statement is not one of them. https://t.co/cnD0DtUfqm

Washington owner Daniel Snyder has recently explored selling the team. Thursday’s announcement could well move that process even farther along.