Brian Scalabrine Thinks Celtics Will Hire Kara Lawson As Next Head Coach: ‘She Is On A Completely Different Level As A Basketball Coach’ 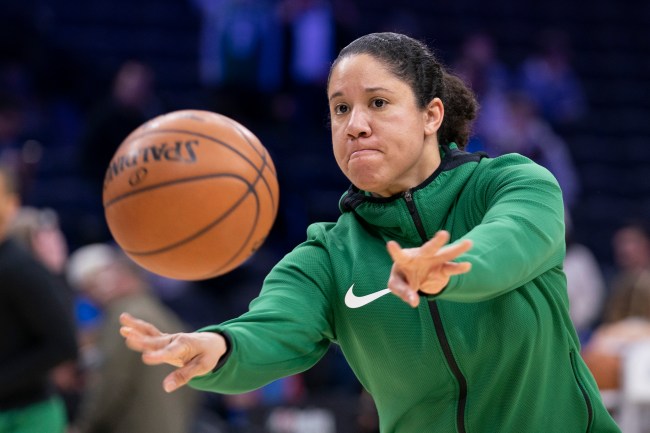 The Boston Celtics prompted a Stephen A. Smith walkout this afternoon after news broke that Danny Ainge would be relinquishing his duties as President of Basketball Operations and Brad Stevens will be transitioning into the role from head coach, a position he looked tortured by this entire season.

The announcement came less than 12 hours after the Summer League Celtics got steamrolled by the Nets in an elimination series, so it doesn’t take the laws of quantum physics to understand this has been a long time coming.

During his appearance on NBC Boston, Scalabrine made it clear his stance is not just a hot take intended to grab headlines, but based an first-hand empirical evidence from her time with the Celtics last season, when the 40-year-old worked closely with Marcus Smart to improve his shooting.

.@Scalabrine explains why he thinks Kara Lawson is the best candidate for the Celtics' new head coach:

"She's elite at what she does…I thought she was head coaching material after just five minutes talking with her." pic.twitter.com/uOqYb7tnFQ

Scal went on to make a convincing case for why Lawson is the most qualified candidate for the job, going as far to say he knew she was head coaching material within five minutes of meeting her.

“She’s insanely good as a coach,” Scalabrine continued. “It’s not one of those things where, ‘Well, she’s good for a female.’ No, no, no. She walked into practice and she commanded practice right from the jump. She was giving people tips and people’s jaws were dropping. She’s elite at what she does. The issue with her going to Duke and she didn’t get the chance to coach this year because of COVID.

“… To me Kara Lawson, I thought from the jump she has head coaching material within five minutes of talking with her. And that is just me meeting with her on my own. And then I started asking the other coaches about her and it was authentically like she is on a completely different level as a basketball coach. I am glad she went out there and took the Duke job because she was like, ‘I want to be a head coach. I want head-coaching experience.’

“I don’t even want to go down the road of saying this would be a historic hire. I think she might be the most qualified for the job. When you think about these players and who they already know and you’re bringing in someone the players respect and Brad respects, to me it makes the most sense.”

Lawson, who is currently the Duke women’s coach, went viral in December for an impressive motivational speech to her Blue Devils team.

Start your morning with a motivational speech from @DukeWBB’s Kara Lawson to help you push through the week 😤 pic.twitter.com/lsMgDumRyd

Can’t recall Brad saying anything that profound. Did I just hop on the Lawson Train?