The Celtics Are Shaking Up Their Front Office After Getting Mollywhopped By The Nets, Replacing Brad Stevens As Coach 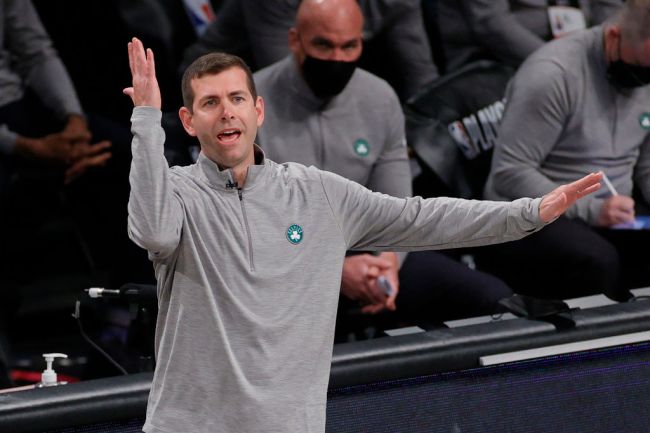 The Brooklyn Nets broke the Boston Celtics. After losing 4-1 to the Eastern Conference favorites in the first round of the NBA playoffs, the team from Beantown is undergoing a complete overhaul.

ESPN’s Adrian Wojnarowski first reported that Danny Ainge was “seriously considering” stepping down. Not long thereafter, reports confirmed the Wednesday morning Woj bomb and alluded to a bigger move. Per multiple sources, Ainge will resign, and head coach Brad Stevens will be named as his replacement.

Brad Stevens is moving from his head coaching role to leading the Celtics basketball operations — and Stevens will lead the search for the Celtics‘ new head coach, sources said. https://t.co/U74E2VBLfo

Brad Stevens is moving into the front office on a full-time role, and Celtics are expected to start a search for a new head coach, sources tell ESPN. Celtics staff and coaches have been informed of the changes. https://t.co/yPf6ERS6NK

The team made it official later in the morning.

Stevens, in turn, will help search for his own successor.

Stevens has been described as worn down with coaching since The Bubble, and welcomed the chance to make the transition to the front office, sources tell ESPN. Stevens will help lead the search for his successor as head coach.

This shake-up comes just hours after Boston lost by 14 to Brooklyn. Kyrie Irving played against his former team for the first time with fans and things didn’t go well for the Celtics. Prior to Game 4 of the series, Irving sparked outrage by stomping on his opponent’s logo at half court. After the game, a Boston fan threw a water bottle at his head. The Nets returned home and made quick work to win the series and advance.

Writing on the wall.

Although the first round went about as poorly as it could have for the Celtics, it wasn’t a big surprise. Boston was projected to be an Eastern Conference powerhouse, but the expectation was not reality. Injuries were rampant in 2020/21. However, even putting the injuries aside, the team just wasn’t very good.

In fact, back in February when the Celtics were below .500, the team’s CEO was still hung up on losing Irving to the Nets. Jayson Tatum helped reach the playoffs with incredible play throughout the later half of the year, but the result is disappointing.

Stevens was hired by Boston eight years ago after rising to prominence as the head coach of Butler University. He and Boston went to the playoffs in seven of eight seasons and compiled a 354-282 regular season record in the process. Reaching the Eastern Conference finals in 2017, 2018 and 2020, the Celtics took a big step back in 2020/21— finishing 36-36 to squeak into the No. 7 seed.