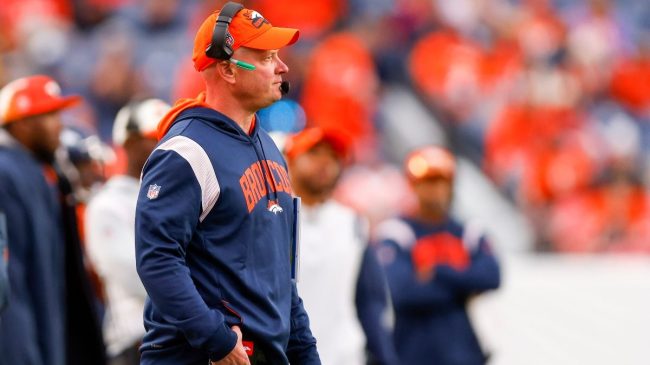 It’s no secret the Denver Broncos are struggling this season as they haven’t lived up to the hype at all. All eyes are on head coach Nathaniel Hackett right now, as many speculate what’s in store for his future. Now, general manager George Patton Speaks out about Hackett and it has the fanbase on edge.

According to Mike Klis, the Broncos general manager claims he fully supports the head coach. Patton seems to ensure Hackett’s job security, for now, especially considering everything is brand new for the coaching staff.

Paton on Hackett II: “But I really like how he’s kept the team together. They’re connected. He’s kept our building together. I appreciate how he came through that.” #9sports

It is true. The Broncos have had multiple primetime matchups to begin the season. Nathaniel Hacket has literally had all eyes on him since becoming the head coach in Denver. It makes sense for George Patton to support Hackett as well, as the franchise hopes for a brighter future.

Broncos Fans Don’t Know How To Handle This Statement

Although Patton is adamant that Hackett’s job is “100%” safe, the fanbase can’t help but speculate the future anyway. Many actually believe the Broncos’ general manager means the opposite and that they could be searching for a new head coach next offseason. Meanwhile, some fully believe George Patton.

Homie got the dreaded vote of confidence. His leash is short.

Then, there are people who think this is the most obvious statement ever.

This is what every GM says until they take action otherwise. How would we expect him to say anything different publicly?

We’ll see how it all plays out in Denver. There could be some major changes on the horizon. However, we have to believe George Patton for now until something happens. For now, keep an eye on Nathaniel Hackett, as the Broncos hope to turn things around in the second half of the season.