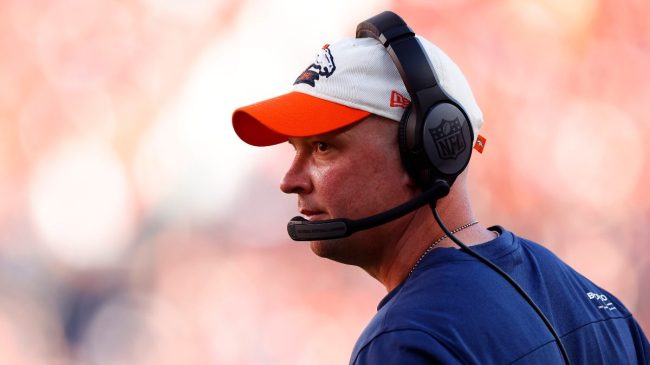 It’s been a rocky start for Nathaniel Hackett as the head coach of the Denver Broncos. Sure, the team is 1-1, and they’ve driven the field well. However, there are numerous blunders that are hard to ignore. Especially when you have someone like Russell Wilson under center. Now, it sounds like Hackett’s new odds to win Coach of the Year could indicate his future with the club.

According to Max Meyer, Caesars Sportsbook has changed Nathaniel Hackett’s odds to win the coveted award from 18/1 to 100/1. That’s a mighty big difference, as the Broncos received a ton of hype for hiring him in the first place. Additionally, Meyer claims that in the offseason, Hackett was at 15/1 to win the award.

Nathaniel Hackett's Coach of the Year odds ballooned all the way from 18/1 to 100/1 yesterday at @CaesarsSports.

The first-year Broncos head coach was tied for the second-lowest odds at 15/1 heading into the season. Hackett is now the biggest longshot in this market.

To go from one of the favorites to the biggest longshot is never a good sign. Broncos fans might be speculating about the future of their head coach with this news. Especially considering they were counting down the play clock to help Hackett and Russell Wilson with time management.

Luckily for him, Denver is currently 1-1 and still within reach of the playoffs. However, Nathaniel Hackett must learn from his mistakes. The Broncos have been putrid in the red zone and his decision-making has been insanely questionable so far. Especially when it comes to kicking field goals.

Keep an eye on Hackett and the Broncos for now. They have done a phenomenal job of driving the field so far, as they’re one of the best in the league in that category. However, if Russell Wilson and the offense can’t turn it around soon, many will be questioning Nathaniel Hackett’s future as a head coach in the NFL.