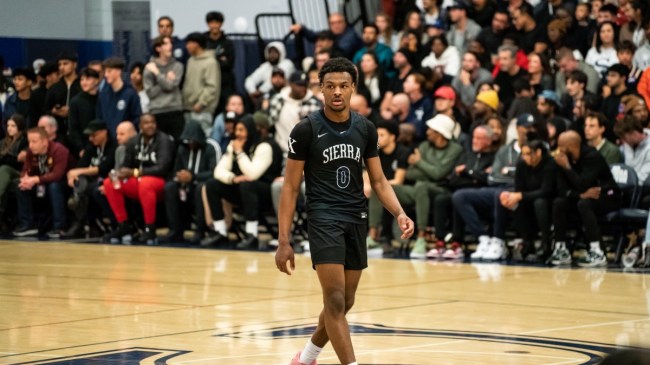 While he may not be the best player in the 2023 recruiting class, Bronny James is certainly the most well-known. The oldest son of LeBron James is among the most followed recruits in history.

After all, that’s what happens when you’re the son of basketball royalty. And, since LeBron didn’t play college basketball, it seems as if Bronny’s recruitment is almost seen through the lens of who LeBron himself may have picked.

Right now, the three schools mentioned the most when it comes to Bronny are Ohio State, Oregon and USC. Here are some more details on his recruitment, courtesy of on3.com from January 20th.

Earlier today, Luca Evans of the Los Angeles Times reported that Chatsworth (Calif.) Sierra Canyon four-star combo guard Bronny James is down to a top three of Ohio State, Oregon and USC. James messaged On3’s Joe Tipton that while he is considering those three programs, his recruitment is still ongoing.

“I’m still open, but those are options,” James told Tipton.

And, here is a bit of the scouting report on James, according to On3.

Bronny James is a sturdy guard, with a strong frame, long arms, and broad shoulders. The 6-2/6-3 guard is a noted defender at the point of attack. He moves his feet well laterally and plays with a chip on his shoulder. Offensively he does not really show blow-by burst in the half-court, but he attacks closeouts well, and he is strong in the paint. James is good in transition, has a little bit of wiggle there, and can get on the rim. He is explosive in straight lines.

Other than where he is going, the other big question mark surrounding Bronny was whether he would make the McDonald’s All-American Game. His player rating puts him right on the bubble of making it. On Tuesday, we found out he would.

Bronny James has been named a McDonald's All-American 👏 @brhoops pic.twitter.com/34nuEOkBhS

That’s quite an accomplishment. This year’s game will be played March 28th in Houston, Texas at the Toyota Center.