Brooks Koepka Denies Fighting With Dustin Johnson, Is ‘Curious Who Would Win In A Fight’ 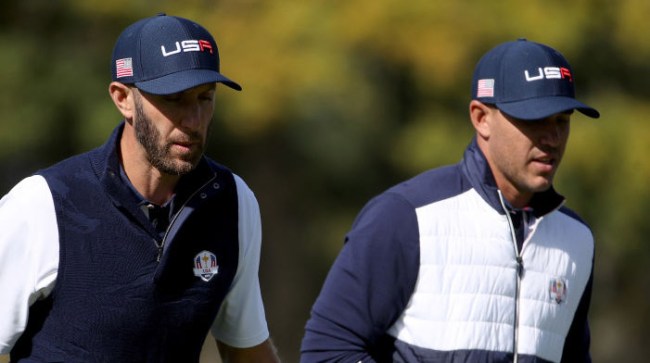 On Tuesday, reports surfaced that claimed Brooks Koepka and Dustin Johnson were involved in an altercation in the European team room after Team USA’s embarassing loss at the Ryder Cup.

Supposed witnesses of the exchange said that the pair almost threw hands. Golf Channel insider Tim Rosaforte even went so far as to confirm that Koepka and DJ had to be separated.

According to Golf Digest, “Paulina Gretzky, Johnson’s fiancee, was a central figure in the incident. Koepka’s girlfriend, Jena Sims, was also involved.”

Johnson and Koepka were paired up for the foursome matches on September 29th and seemed to be getting along fine at that point in time. Of course, things rolled quickly downhill from there for the American team.

Gretzky and Sims also seemed pretty chummy at the Ryder Cup gala dinner prior to the tournament.

Now, because it was unavoidable, Brooks Koepka had to address the reports, which he did on Wednesday at the European Tour’s Alfred Dunhill Links Championship in Scotland.

“This Dustin thing I just don’t get,” said Koepka, as reported by GolfWeek. “There was no fight. No argument. He is one of my best friends. We talked on the phone on Monday, so tell me how we fought?

“People like to make a story and run with it, and it is not the first time a story has come out that is not true.”

Koepka’s agent, Blake Smith, also told Golf Digest, “From what I gather I believe someone made this story up. Nothing to report on our end.”

A European tabloid making up salacious stories? No. Way.

“The problem is you guys try to find a reason why we lost,” Koepka continued while speaking at Dunhill Links. “The whole Dustin thing, it’s actually quite funny to us as we are really good friends. There was no argument, no fight, but I’m curious who would win in a fight. It would be interesting.

“We never fought, that’s not our relationship. We’re two even-keeled guys and I can’t even remember raising my voice to him or him to me in our four years of friendship.

“That’s not who we are. We’re pretty laid back and it’s just you guys trying to make something that’s not there. We supposed(ly) fought on the plane on the way over too when we were sleeping. It’s just awful.”

I don’t know about you, but I am thinking that a Koepka vs. Johnson MMA undercard fight might be just the thing the Tiger vs. Phil pay-per-view needs.