Brooks Koepka Fired ALL The Shots During His U.S. Open Presser On Tuesday 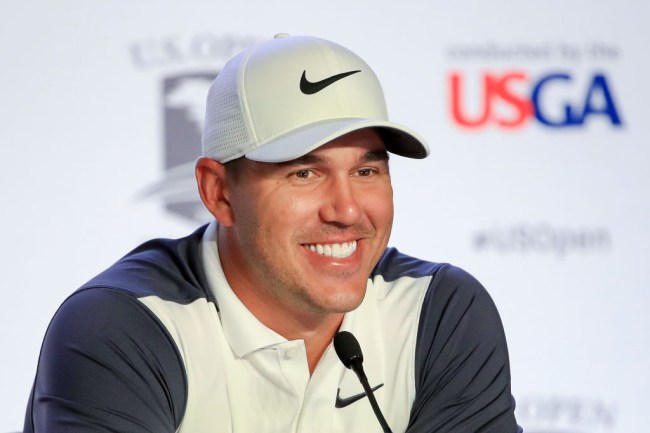 Brooks Koepka is a bad, bad man. He’s won back-to-back PGA Championships and is looking for his third straight U.S. Open title this week at Pebble Beach. The 29-year-old clearly does most of the talking with his game, but since earning a seat in the spotlight over the past few years he hasn’t held back with the media either.

Koepka’s confidence and mindset are what makes him who he is, it’s what makes him different from other guys on Tour and it’s clearly working. It’s also why some fans love Koepka and some still don’t give him the respect he deserves.

That same confidence is shown with pretty much every answer he gives at any presser any given week, but during major championship weeks, it’s ramped up even more.

It’s U.S. Open week and during his Tuesday presser, we got Koepka at his best.

So, here’s a question, if you’re FOX, who’s covering 100 percent the U.S. Open this week, wouldn’t you think to put some highlights of Koepka in every promo? I mean, after all, he’s won the last two U.S. Opens and happens to be the No. 1 player in the world. Well, they didn’t think it was necessary, and here’s what Koepka said when asked about it:

“I actually didn’t see it for a long time. A bunch of people on Twitter I think tagged me in it, in the promo. And I guess [they] were amazed that I wasn’t in it. I just clicked on the link and saw it and watched it. Just kind of shocked. They’ve had over a year to kind of put it out. So I don’t know. Somebody probably got fired over it or should [laughter].”

Brooksy not happy there’s a FOX commercial promoting the US Open right now and he’s not in it. 🤟

Ok, a somewhat mild answer from Koepka, but it turned out to just be a little appetizer to what was to come later in the press conference.

After last year’s drama with the USGA setup at Shinnecock Hills for the U.S. Open, it’s obviously a major point of discussion heading into this week. Koepka of course doesn’t have a complaint about last year’s setup seeing as how he won the tournament, but he was asked about how other player’s thoughts about the USGA and how they set up the U.S. Open.

“I’ve just never been one to complain, make excuses. It doesn’t matter. Nobody wants to hear anybody’s excuse. I find it annoying even when I play with guys and they’re dropping clubs or throwing them or complaining, like telling me how bad the golf course is or how bad this is. I don’t want to hear it. I don’t care.”

Like I said earlier, Koepka is a bad, bad man. Who else on Tour talks like that? Nobody.

Sure, you get your occasional player getting honest at the podium every now and then, but nobody does it consistently like Koepka does. He sticks to his style and never shies away from it.

His style is working better than any other golfer’s on the planet, so don’t expect Koepka to change anytime soon.