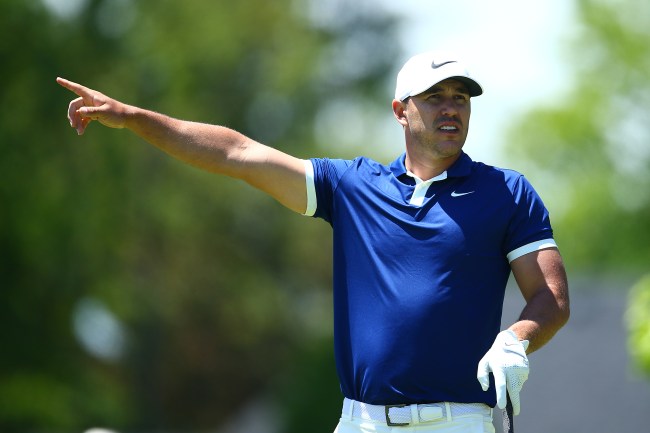 Golf’s U.S. Open tees off on Thursday from Pebble Beach, and one of the favorites going into the tournament is defending champion Brooks Koepka, who has become one of the best players on the PGA Tour after impressively winning his fourth major title last month at the PGA Championship. While Koepka looks to defend his U.S. Open title, before he gets to work, he made sure he had some fun with one of the guys who will be calling the tournament on TV, FOX Sports’ Joe Buck.

For those who might not remember, Buck was heard on TV having a little bit of a blunder back in 2017 during the U.S. Open that Brooks Koepka won. After the golfer earned the major victory, Buck mistakenly referred to Brooks’ current girlfriend, Jena Sims, as his former one, Becky Edwards. Here’s a look at the moment to refresh your memory.

Well, while it may have taken Brooks Koepka a couple of years to get back at the longtime sports broadcaster, the golfer did cop a little revenge while the two were at the U.S. Open today. How? Just look at the video that Buck posted to his Twitter account, where Brooks comes in and refers to the broadcaster as “Jim Buck.”

Big week for FOX Sports and always good to see old friends at a US Open… Payback is a… @BKoepka @FOXSports @usopengolf pic.twitter.com/12kpWnlc1p

For those wondering, a simple Google search on who Jim Buck is shows that the dude was a professional dog walker after leaving his sales job in 1960, ultimately building a company called Jim Buck’s School for Dogs that often saw him walk six or more dogs at a time. Sure, Brooks Koepka could’ve roasted Joe Buck even more by pulling out some other guy’s name who wasn’t actually successful, but this is well-played regardless.

Something tells me that, should Koepka win this year’s U.S. Open, Joe Buck won’t be F’ing up Jena Sims’ name again.