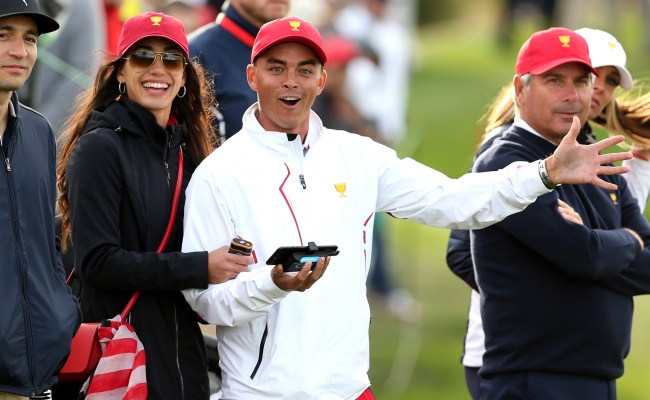 Two weeks ago Team USA captain Tiger Woods made his captain’s picks for the 2019 Presidents Cup. He selected Gary Woodland, Patrick Reed, Tony Finau and himself.

Following his picks, he came out and said that not picking Rickie Fowler was the toughest decision he had to make, but in the long-run Fowler will be a part of this team after all.

It was announced on Wednesday that Brooks Koepka has withdrawn from the event due to a knee injury and Fowler has stepped in to fill his spot.

Brooks Koepka has withdrawn from the @PresidentsCup due to a knee injury. U.S. Captain @TigerWoods has named @RickieFowler as his replacement. pic.twitter.com/dFQDo6XK7X

“I think the toughest call to make was the closest to making the team is Rickie,” Woods said after his picks. “That was a tough phone call. Rickie’s a good friend of mine and I’ve known him for a long time. Kept it short and quick. No reason to make it a lengthy conversation. He’s obviously going to be very disappointed by it. I’ve been on that side. I’ve been there when the captain didn’t choose me, and I get it. It’s not easy.”

Fowler is an obvious replacement for Koepka, but it is worth noting that he hasn’t played a tournament round of golf since August, but is set to be in the field at the Hero World Challenge in December. This will mark the third straight Presidents Cup team Fowler has been a part of.

Koepka told Golf Channel that he was all-in on being healthy for the Presidents Cup, but came to the conclusion he needs more time to heal.

“Since my injury in Korea, I have been in constant contact with Tiger and assured him that I was making every effort to be 100 percent in time for the Presidents Cup in Australia. However, I need more time to heal,” Koepka said in the statement. “I’m sorry I won’t be able to represent the red, white, and blue this time around and I wish my teammates nothing but the best as they work to retain the Presidents Cup for the USA.”