Bruce Arena Resigns As Coach Of The USMNT, Twitter Reactions Are VERY Supportive Of This Move 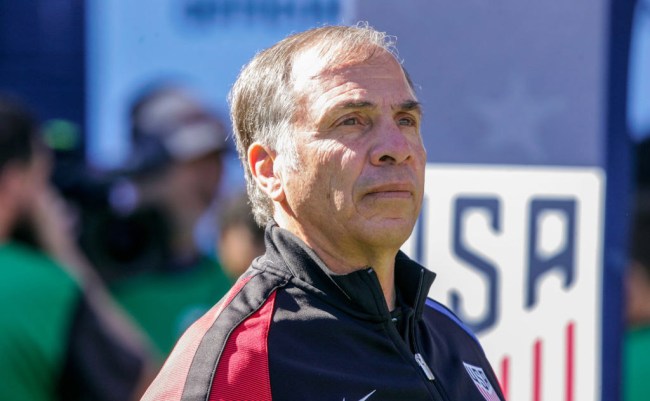 Ever since the U.S. Men’s National Team somehow failed to qualify for the World Cup by losing to #99 ranked Trinidad & Toboga this past weekend American soccer fans have been in quite a snit.

Everyone from ESPN soccer analyst Taylor Twellman to the next generation of American soccer fans have been going hard at the team and its coach Bruce Arena.

Even two days after their inexplicable loss fans on the internet were still calling for Arena’s head.

It’s been two days @ussoccer, why does #brucearenas still have a job?

wait why the fuck has Bruce Arenas still not been fired?? this is getting more embarrassing each day

Umm it's been 2 days now and the USA still hasn't fired Bruce arenas? UMMM WHY?! He should have resigned on the touchline.

That is just a taste of the anger that’s been permeating soccer social media.

On Friday, those fans wanting to see Bruce Arena fired got their wish…sort of. He quit.

“No excuses. We didn’t get the job done, and I accept responsibility. This certainly is a major setback for the senior Men’s National Team program, and questions rightly should be asked about how we can improve. No doubt this process already has started and will continue so that U.S. Soccer can progress,” Arena said in a statement.

“Having said that, it also is important to recognize the tremendous growth and accomplishments we have achieved over the past two decades in all areas, including player development, coaching education and a stable domestic professional league. That work is ongoing, and despite the result in Trinidad the sport is on the right path. By working together, I am confident soccer in this country will continue to grow in the years and decades ahead. Obviously the biggest disappointment is for our fans.”

Yeah, about those fans, Bruce…they pretty much want to make sure you don’t let the door hit you in the ass on your way out.

Bruce Arenas with the ole, you can’t fire me, I quit!

dude should change his name to Bruce Won't Be Coaching In Arenas Anymore, Because He Sucks, We Lost To Fucking Trinidad & Tobago FFS

Bruce Arenas resigning is not enough he should be forced to entertain us all July next summer. He shall be our jester.

Thanks for nothing Bruce.

3 Days late but I’d take it. Gulati next. #FireGlati.

Should have happened in November

Bruce Arenas is the Jay Cutler of the USMNT

Okay now, that was just low.