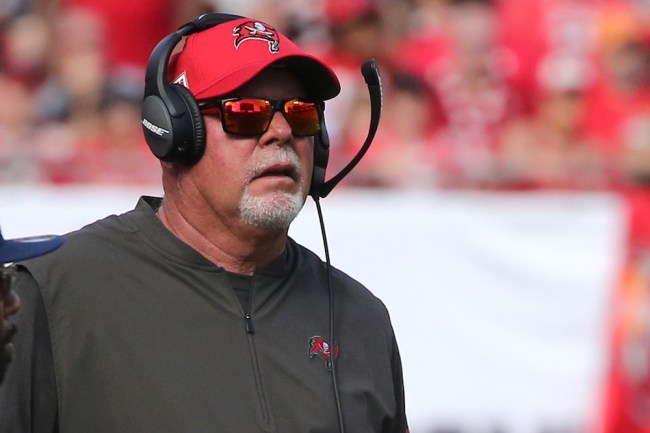 NFL coaches have to gameplan for any outcome on the field, but with coronavirus still not being under control, head coaches have to plan for everything that could go wrong before Sunday.

Teams will hopefully go to extreme measures to keep players safe but NFL coaches still have to deal with the “what if” scenarios.

What if Tom Terrific gets exposed and needs to quarantine for two weeks? What if one of the other quarterbacks comes down with COVID, leaving the team with only two arms on game day?

Arians discussed his options on Chris Long’s podcast, “Green Light”, and Arians explained his idea of quarantining a back-up quarterback prior to game day.

Coach @BruceArians thinking ahead in what could be a unique fall. Link in pinned tweet for the entire pod. pic.twitter.com/tJZSGs3JR2

“Yeah, that’s one of the things I’ve been pondering the last two or three weeks, as we set the protocols,” Arians said.

“From what I’m understanding is if you test positive, you get quarantined for two weeks. Now, if you have no symptoms, I don’t know what that means — is it a false (positive)? Is it… There is so much to learn and still explore with this thing.

But I’ve thought about keeping the third quarterback on the roster out of the room. We have two guys that have been in our system (Blaine Gabbert and Ryan Griffin), really sharp. So I might have to quarantine a quarterback just in case of a quarantine.”

The NFL sent a memo to teams about reopening protocols and included instructions for reconfigured locker rooms in an effort to promote social distancing and the league encouraged virtual meetings whenever possible.

The league hasn’t made any formal announcements about the season starting but the August 6th Hall of Fame game is fast approaching. In order to start on time, the NFL would have to cut some preseason games, and that option is being discussed.