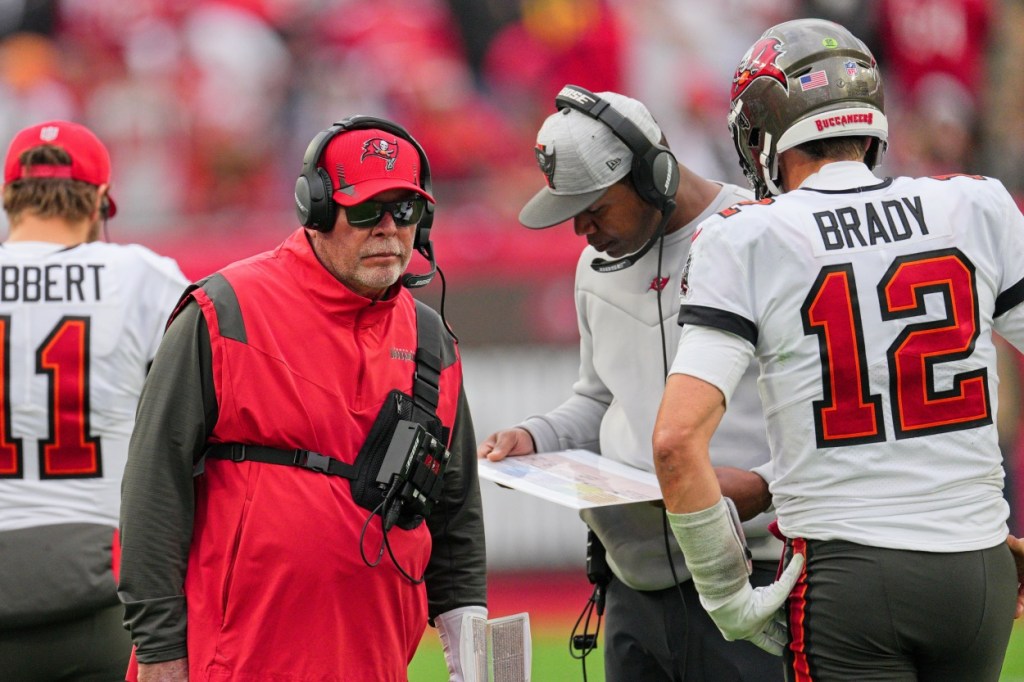 My hometown Tampa Bay Buccaneers are out of the NFL playoffs. They no longer have the chance to win back-to-back Super Bowls even after Tom Brady channeled magic once again and rallied the Bucs from a 27-3 deficit and tied the game 27-27 with 46 seconds left on the clock, aka enough time for Cooper Kupp to pick up 64 yards and the Rams kicked an easy FG to win.

There are a lot of questions about what the Tampa Bay Buccaneers will look like next season. Will Tom Brady return and become the oldest NFL quarterback in history and the first to play at 45-years-old? What about Gronk? And will Tampa’s offensive coordinator Byron Leftwich and defensive coordinator Todd Bowles return? Both are amongst the most sought-after candidates for vacant head coaching positions.

Right now, we know this: Buccaneers head coach Bruce Arians is coming back next season. And on Monday, he was asked by JoeBucsFan what it will look like if offensive coordinator Byron Leftwich leaves and takes the head coaching job in Jacksonville. Here’s what he had to say.

Arians replied: “There would be a really good chance [of me calling plays], yes.”

The head coach went on to explain that his 2022 playcalling preparation during game weeks would be lightened by staff, so it wouldn’t be the same burden he took on — and said he could no longer handle — as a head coach/playcaller in Arizona.

HUGE: Bruce Arians just said that if Byron Leftwich gets a head coaching position, he would take back play-calling duties. He gave that up when he left Arizona, in large part, due to health. But he said he’s gone through some ways he could manage the load differently.

As a Bucs fan, I don’t love it. That’s a lot on one man’s plate. I’ll be happy for Byron Leftwich or Todd Bowles if they leave to take head coaching positions but I’d much rather see everyone, including Tom Brady and Gronk, stay in their current roles for one more season. Gronk told reporters on Monday that “there’s nothing serious with my body that is nagging me” and he’s only experiencing the normal bruises and soreness from after a game. So he sounds ready to run it back.

As for what’s up between the Bruce Arians and Tom Brady, it sounds like Bruce is optimistic and hanging tight for Tom to make the right decision to return in the coming days, with or without Byron Leftwich.

Bruce Arians said they will give Tom Brady all the time he needs to make his decision. They will go over contingency plans. He said he feels comfortable with the other guys he has in the QB room, “but you never know what’s behind door No. 2.” That’s how they got Brady.

Tom has said in the past that he plans on playing until he’s 45. It’s not explicitly clear if he means up to 45 or stopping next season when he’s 45 years old. We’ll all know soon enough, right?