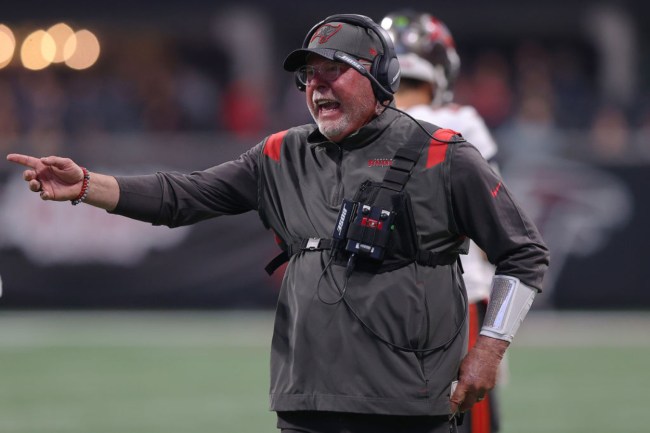 The Tampa Bay Buccaneers may be embarrassing the Philadelphia Eagles, but Bucs’ head coach Bruce Arians doesn’t seem to be totally pleased with his team’s effort.

During the third quarter with the Bucs already up 17-0, Philadelphia return man Jordan Reagor muffed a punt that was returned by the Bucs. It was both a bad play by Reagor and a great effort from the Bucs’ special teams unit to recover the fumble, which is why it was very strange to see Arians go over to Andrew Adams and smack him across his helmet.

It wasn’t one of those moments where a coach smacks a player on the helmet because they’re fired up about a great play, either, Arians was genuinely mad at Adams.

Bruce Arians Smacks His Own Player In Frustration

In the replay, it simply looked like Adams was standing around the play and Arians randomly decided to go hit him in the head for no reason at all. NFL fans reacted accordingly to Arians smacking one of his own players across the head. Some fans thought Arians was simply coaching, while others think he may have crossed a line.

Just look like some old school coaching to me….. nothing to see here https://t.co/oVarRV6zCY

This is not ok. https://t.co/ZwyrTg9Yhv

How more players don't put these old men on their asses when they put hands on them is beyond me https://t.co/j1MJgBDt1j

While the initial replay didn’t show why Arians was so upset with Adams, a later replay from FOX showed the Bucs’ safety going over to the pile trying to throw Eagles players out of the pile. If a player pulls an opposing player off of his teammate it typically results in a 15-yard penalty. Adams got away with the play but didn’t escape the wrath that was Arians’ left hand.

At the end of the day, Arians obviously got caught up in the moment. Some folks will be angry that Arians laid a hand on a player in that sort of fashion, while others won’t think twice about it.