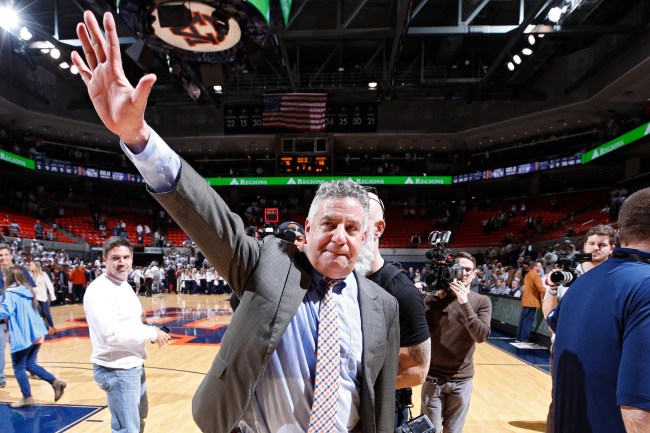 Bruce Pearl, the successful Auburn Tigers men’s head hoops coach, is often seen wearing a white shirt to pair with his suit. No, it’s not because the plain color brings his team better luck, it’s because the dude sweats worse than a whore in church, so any shirt with color shows off just how much he’s perspiring during a game. In fact, Bruce Pearl sweats so much that he’s close to leading our Sweat 16 contest, which has you guys voting for the sweatiest coaches in college hoops.

The whole thing has kind of become a joke at this point, because the Internet has picked up on the fact that Bruce Pearl is a really, really, abnormally sweaty man, and there are lots of things on social media that prove it. Take a look at some of the things people have tweeted recently regarding Pearl’s perspiring ways.

I love Bruce Pearl.
His sweat buckets and passion buckets are equally overflowing.
His team needs its swagger back. pic.twitter.com/kbk0UTznAV

If coach Bruce Pearl were coaching in this game there might be a suspended game #sweat pic.twitter.com/e29aC2Emmo

Bruce Pearl is putting Sean Miller to shame with his sweat game. #Auburn

This has led some to wonder what causes such sweat? Does Bruce Pearl have a medical condition? Does he just get super anxious? Is he intense AF? Does every single gym his Auburn Tigers play in have the temperature cranked up to 90 degrees? All may be true, but, according to a Sports Illustrated piece that asked Pearl about his obscene sweat, it’s something that just sort of happens. And, believe it or not, it’d be even worse if he didn’t stick to a daily routine of working out each morning.

Pearl usually wakes up around six, “with my mind moving a million miles an hour,” but today he slept until 7:30, which for most folks is like snoozing through lunch. After a workout at the Marriott gym (“because I sweat like a banshee and I can’t imagine how much I’d sweat during the game if I didn’t work out before”)…

Given the amount of sweat puddles around Bruce Pearl by the time a game ends, it’s hard to believe that he would be even worse if not for a morning workout. Seriously, the Auburn coach makes life hard on those sweat moppers who stand on the sideline.

Bruce Pearl’s Tigers are set to take on the North Carolina Tar Heels Friday night in the Sweet 16, so I’ve got a hunch that, given the stakes, the Auburn head coach will be as drenched as someone sitting in the Splash Zone at Sea World by the time the game is over.