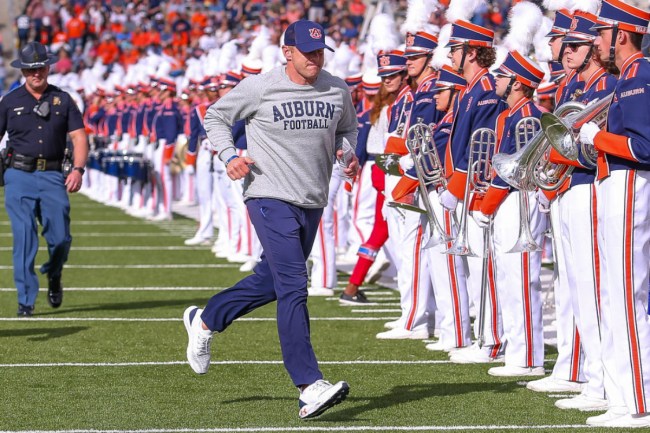 While many assumed that Auburn was looking for a way to get rid of Bryan Harsin as its head football coach, the Tigers have reportedly decided to stick with him.

According to ESPN’s Pete Thamel and Chris Low, Auburn officials are expected to announce that Harsin will be retained.

From me a @ClowESPN: Auburn officials are expected to announce today they are keeping coach Bryan Harsin.

If you think a college football program announcing that it’s sticking with its head coach, in February no less, is strange, you’re not wrong. That, however, is just the situation Auburn finds itself in at the moment.

Harsin led the Tigers to a 6-7 season in what was his first campaign as head coach last year. Auburn has also had tremendous turnover when it comes to the rest of its coaching staff this offseason.

Then there were the rumors about Harsin that have nothing at all to do with his coaching abilities. Harsin’s wife and one of his daughters even jumped on Instagram to defend the head coach as rumors swirled. With Harsin’s future up in the air, the university released a statement announcing that it was looking for information anywhere it may appear in relation to Harsin, but also stated it does “not make institutional decisions based on social media posts or media headlines.”

Harsin and the Tigers have been a punching bag for a couple of weeks now and folks on social media continued to take shots at the football program given the news that Harsin will be staying on board.

Auburn has never Auburned harder than they have in the last week. https://t.co/2uIkRT4087

Congrats to everyone but Auburn https://t.co/UaC7T7ADk6

I'm sure this is an ideal situation for all parties involved.

Essentially, we had enough suspicion to look into a lot of things… but couldn't find enough to get past that buyout number. https://t.co/4uqegBfbZ4

You know you are in a good spot that can only end up going well when after 1 season and months of speculation the program plans to announce they’re keeping you…for now. https://t.co/Sj1c5R4GFC

Imagine having to announce you’re keeping your football coach in February after one season https://t.co/IrNVCzb5ig