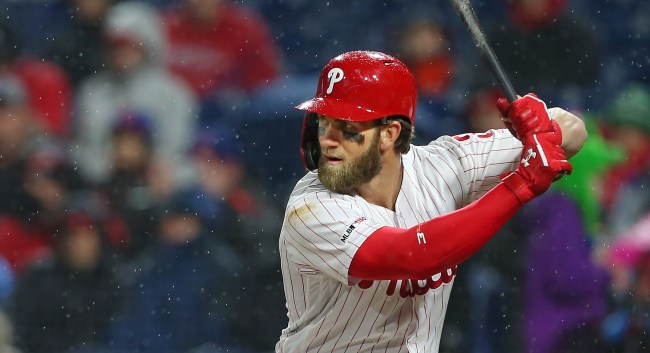 As much as we’d like to think it’s possible (for ourselves), you don’t get to the top of the mountain in your chosen profession by not working your butt off.

Sure, when it comes to sports there needs to be an underlying natural ability, like, say, the kind of ability Bryce Harper showed when he was featured in Sports Illustrated … at the age of 16.

But as we have all seen, having natural ability when it comes to doing something will only take you so far.

Which is why guys like LeBron James, Aaron Judge, Jordan Spieth and other elite athletes are just that: elite. They put in the work.

Bryce Harper, who won Major League Baseball’s Most Valuable Player Award at the age of just 22 is also one of those people.

So what does the 26-year-old do to stay at the top of his game?

MensHealth.com recently caught up with Harper and just flat-out asked him.

Aside from talent, what else has gotten you to this point in your career?

Staying on the right path. Remembering where I came from. Having the parents that I do, the wife that I do. I’m surrounded by a great team of people that care about me on a personal level. When I was younger, there were plenty of times that I’d go to hit instead of going to a party. So putting things in perspective each day, doing the things that I could to be the best person I could be on and off the field.

You’re obviously getting constant, sometimes unsolicited, feedback about the decisions you’re making with your career. How do you stay so grounded and in your decisions when so many people have an opinion on what you’re doing?

Harper also explained that he doesn’t go on Twitter (he has a guy do it for him) because he doesn’t want to be influenced by what people are saying online.

“Everybody always has an opinion. Everybody has a platform now, because the Twitter or Instagram or anything like that,” he explained. “So for me, I stay away from it and I stay in my lane. I stay with the people that I love. I stay around the people that I enjoy being around. It’s a very small group of friends, and we’re always positive — that’s the biggest thing.”

Harper says that a typical day during the baseball season begins between 11:30 a.m. and 12 o’clock, then he hits the field by 2:30 or so, get his treatment in, takes BP, throws and stretches as a team, then he comes back in, eats, and does a “full-blown workout” right before the game.

It’s usually like 25 to 30 minutes of high intensity. This way, I’m firing every single muscle in my body and I’m doing everything I can to get things going in the right way. It helps me when I’m out on the field. Granted, the things that work right for me, they may not work for somebody else. But I’m finding the things that work for me. And granted, it’s the same thing over and over and over again during the season. So you better like the routine that you’re in, or you picked the wrong profession.

As for how Harper stays focused with all the distractions surrounding him on a daily basis, he says the baseball field is his “sanctuary” and where he loves to be, plus, while out there, he tries to “not to think at all.”

“The more you think, the worse you are. I want to feel, you know, what I do and how I do it. I’m not trying to get into my own way,” Harper explained.

Harper also went into some detail about the move to Philadelphia, his diet, what advice he would have given himself at age 16, and more. Read the entire interview with Harper at MensHealth.com.