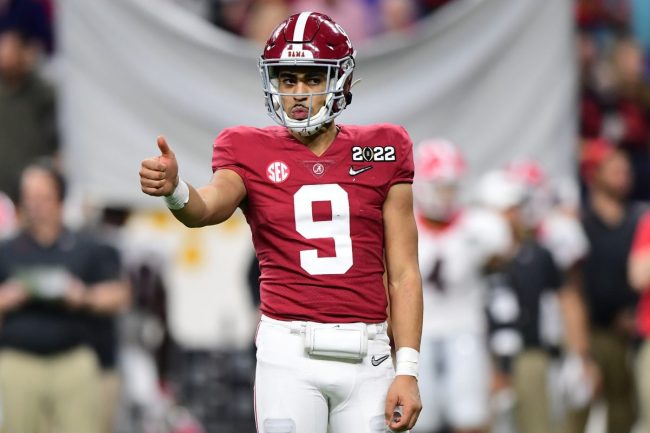 It shouldn’t shock anyone to see Young sign yet another huge NIL deal. He is absolutely thriving in this new era of name, image, and likeness. His play on the field is a big reason for that.

The signal caller racked up nearly 5,000 passing yards last year while tossing 47 touchdowns to just seven interceptions. And after losing the national title game the last time he took the field, he’ll be on a revenge tour.

Young was college football’s best player in 2021, and he could quite possibly go for a second straight Heisman in 2022, but this latest deal has some folks hesitant on his outlook.

The reasoning behind that hesitancy? The Fansville Curse. Look no further than last year for proof.

Uiagalelei was dubbed the face of the soda company’s series after an impressive freshman season. The passer took over full-time under center in 2021, with many expecting a big campaign.

Uiagalelei struggled, though, completing just 56% of his passes and throwing more picks than touchdowns. Could the same happen to Young?

Fans on social media have been quick to react.

The first commercial of the “Fansville” series dropped on Monday, and it shows Bryce Young making a cameo appearance. Check it out below.

Chaos comes to Fansville, and this year @drpepper has signed a NIL deal with Alabama QB @_bryce_young.

After seeing Young in the ad, many are hoping that it doesn’t mean he’s in for a bad year. The “Fansville” jinx is quickly becoming the equivalent of the NFL’s Madden Curse.

Is there a Fansville Curse? Bryce Young intends to find out. https://t.co/VeSZSM0DA4

Fansville cursed season upcoming. You hate to see it. https://t.co/HSzGJC3hJz

Throw this in with music superstar Drake possibly jinxing Alabama this offseason, and things are beginning to get ominous in Tuscaloosa.

We’ll see if Bryce Young is able to beat the curse, or if he becomes the next Fansville player to fall victim to a down season.