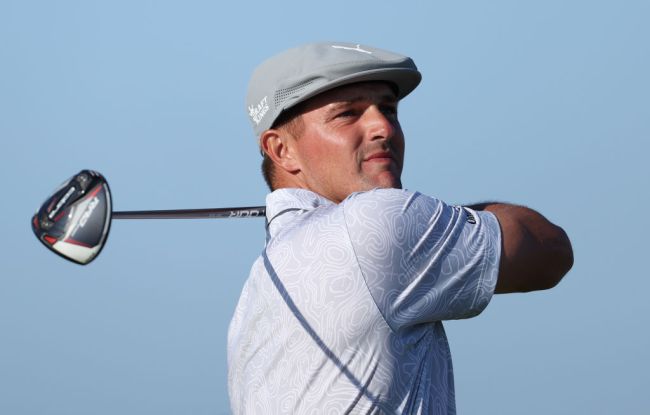 Bryson DeChambeau was unable to represent the U.S. in the Olympics after testing positive for COVID-19. He returns to action this week on the PGA Tour and will be teeing it up in Memphis still without having received the vaccine.

Golf Channel’s Ryan Lavner spoke with DeChambeau, currently the No. 7 ranked player in the world, about his experience with COVID. DeChambeau explained that he did have symptoms of fatigue and lost about 10 pounds while battling the virus.

DeChambeau also explained that even after being forced to withdraw from the Tokyo Games, he’s still not on board with getting the COVID-19 vaccine.

“The thing is, the vaccine doesn’t necessarily prevent it from happening,” DeChambeau began.

That statement is true, fully vaccinated people are testing positive for the virus, but it’s the rest of DeChambeau’s statement that will have a lot of people scratching their heads.

“That’s where for me, I’m young enough, I’d rather give it to people that need it. I don’t need it. I’m healthy. I’m a young individual that will continue to be healthy and continue to work on my health. But I don’t think taking the vaccine away from someone that could need it is a good thing,” DeChambeau said.

“As time goes on, if it’s mainstream – like, really, really mainstream – and everything is vetted out, yeah, I don’t have an issue [getting vaccinated].

Bryson Has Made Up His Mind On The Vaccine

DeChambeau has every right to make the personal decision to not get vaccinated, but his statement about taking the vaccine away from someone who needs it doesn’t hold much truth.

The United States has a vaccine surplus. Some states have even turned down planned shipments from the federal government.

The reality is, DeChambeau has had COVID-19, showed symptoms, and a positive test kept him out of the Olympics. He’ll likely have more opportunities to tee it up in the Olympics in the future, but if he’s not wanting to get vaccinated now, odds are he won’t be changing his mind anytime soon.

Again, that’s his choice, he’s a grown man that’s making what he believes is the right decision for him. At the end of the day, he probably wishes he avoided the question about his vaccination status.