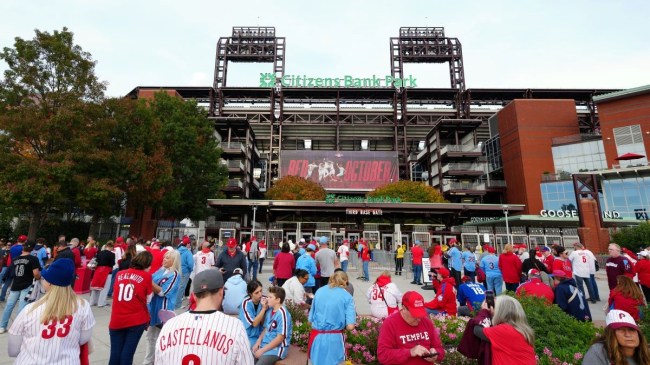 The Philadelphia Phillies are currently in the midst of a magical playoff run. Philadelphia began the season with high hopes, but a horrendous start to the season led to the firing of manager Joe Girardi.

But since then the Phillies have turned things around despite losing reining NL MVP Bryce Harper for a good portion of the season. Philly snuck into the postseason with a win over the Houston Astros on the last weekend of the regular season.

Since then, they’ve gone on an improbable run. It started with a two-game sweep of the St. Louis Cardinals in the Wild Card round. Philly then took care of their NL East rivals and the reigning World Series champion Atlanta Braves in the NL Division Series.

Philadelphia currently leads the San Diego Padres 2-1 in the NL Championship Series heading into Saturday night’s Game 4. One fan with an emotional backstory did everything he could to make sure he got to see his team in the NLCS. Now he’ll be at Game 4 in Citizens Bank Park thanks to rookie shortstop Bryson Stott.

Geoff Crawley is a longtime Philadelphia Phillies fan who lives in Washington D.C. Crawley recently lost his father, also a huge Phillies fan, to cancer in July. When the Phillies made the NLCS, Crawley knew he had to get to a game. But it turns out it was more affordable for him to fly across the country to see a game in San Diego than to buy a ticket in Philadelphia.

So that’s just what he did. Armed with a sweatshirt with a picture of his father on it, Crawley bought two tickets to Game 2 of the NLCS and watched his Phillies play.

Geoff Crawley lost his Dad to cancer in July. His Dad is on a sweatshirt sitting next to him for Game 2 🙏 pic.twitter.com/bTa9AMRP1s

Stott, who has been an instrumental part of the team’s playoff run, caught wind of the story.

Hey John. If we haven't already, could you get in contact with Geoff I would be happy to leave him 2 tickets for this weekend. Thank you, Sir!🙏🏼🔔 https://t.co/4LSpfzNjr8

Eventually, he was able to track down Crawley and leave him two more tickets. This time, however, Crawley and his father would get to watch their beloved baseball team play in the NLCS at home for Game 4.

Phillies fan Geoff Crawley made it to CBP tonight with tickets that Bryson Stott gave him. Bryson heard the story of how Geoff lost his father Skip to cancer this summer. And went to San Diego for the NLCS. His Dad is here in spirit with him on his sweatshirt 🙏 pic.twitter.com/DVEGFIxY1f

Fans across the league were touched by the story.

Don't make me root for the phillies.😭😭😭😭 https://t.co/bTRkz4ClLS

THIS is the kinda stuff I love https://t.co/QdyY9GTAcg

If the vibes weren’t good enough as is in Philadelphia, they’re now positively undeniable.