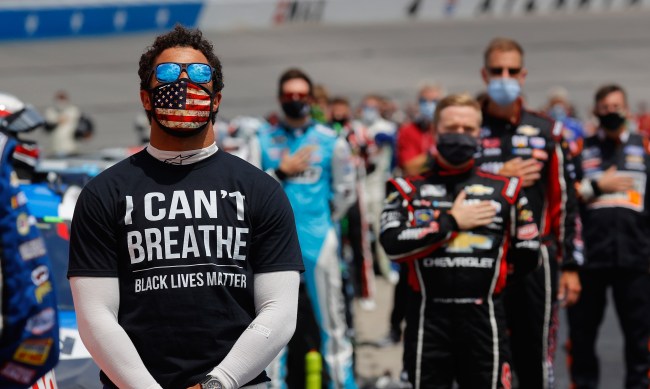 A North Carolina racetrack owner is in hot water after placing an ad on Facebook for “Bubba Rope.” The tasteless Facebook ad came just days after a noose was found in Bubba Wallace’s garage stall at Talladega International Speedway.

In the ad, Mike Fulp, 55, of Lawsonville, who owns the half-mile dirt race track near the Rockingham County line, listed “Bubba Rope’’ for sale with a pitch: “Buy your Bubba Rope today for only $9.99 each, they come with a lifetime warranty and work great.’’

The ad has seen been taken down.

Earlier in the week, the FBI concluded that no crime was committed since the noose found in Wallace’s garage “had been there since 2019.” Conspiracy theorists quickly painted the picture of Wallace faking the entire incident for his own benefit.

Wallace said he had photo evidence of the hate crime and, yesterday, NASCAR released a photo of the rope and it’s 100% a noose.

A spokesman for Gov. Cooper condemned Fulp’s remarks and told the Journal “This incident of racism is horrific and shameful. North Carolina is better than this.”

Yahoo! Sports reports that this incident isn’t the first offensive post from Fulp or 311 Motor Speedway.

Fulp has a history of racist and offensive social media posts in recent weeks, including one on Wednesday asking for fans to bring Confederate flags — something NASCAR finally banned earlier this month — to their “heritage night” on Saturday.

He also opened up his racetrack in May to fans despite Cooper’s order banning large gatherings due to the COVID-19 pandemic, however did not let the “corona-infested” media members in.

Indeed, Fulp’s post inflamed plenty of people who follow him on Facebook. Several who described themselves as loyal spectators wrote to Fulp that they would stop attending 311 events because of the post. Other people shared screen shots of nearly a dozen of Fulp’s older Facebook posts, since deleted.

In one he writes: “We’ve really been bad people. I think we should give them a bucket of Kentucky Fried chicken, 2 watermelons and a plane ride back to Africa.’

Another post features a photograph of George Floyd, who died last month at the hands of Minneapolis police, with a caption: ”Congratulation, George …. 2 weeks drug free.”

While it is unclear whether Fulp’s post for “Bubba Rope” is actually a hate crime, the NC Beat, a Facebook page with news and information about hate crimes, urged people to alert the FBI to Fulp’s post.