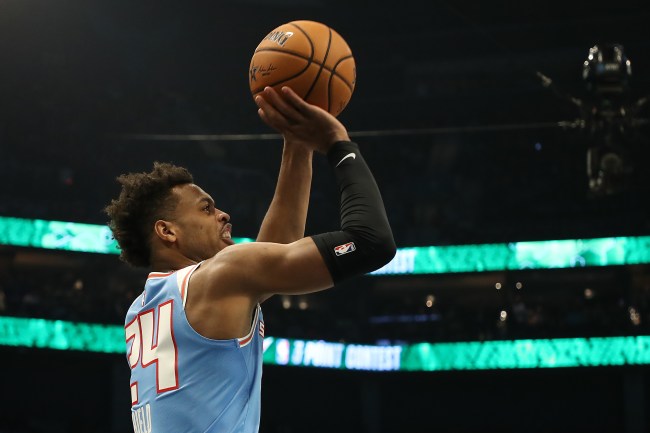 Buddy Hield sure is showing confidence in his young and up-and-coming Sacramento Kings team to reach this year’s NBA Playoffs, and he’s putting his money where his mouth is. Hield, who’s averaging a team high 20.5 points per game this season, said that he’s willing to bet his house that the team is in the postseason — so anyone else willing to take this wager?

The Kings, who haven’t made the playoffs in 12 years — the longest current drought in the NBA — currently sit in the 9th position in the Western Conference with a record of 30-27, sitting just a game behind the L.A. Clippers for the final 8th spot. So it’s not as if Buddy Hield’s proclamation is the boldest thing ever, but, man, saying something like this in public puts a little added pressure on it happening.

Here’s what Hield had to say, per Bleacher Report:

“Very confident. I’d bet my house on it,” Hield told reporters Wednesday. “I make a lot of money to buy the next one.”

“You can’t bet your dogs,” Hield said. “I’m just confident. If I don’t say it, [reporters] will say, ‘He’s not confident enough.’ That’s how I was raised. I trust in God, and hopefully, he favors us.”

Buddy Hield and his Kings return to action following the All-Star break tonight agains the two-time defending champion Golden State Warriors, and he knows it’s crucial to get off to a fast starts in the second half of the season to prove his bet comes true by the time it’s all said and done. He also admitted he checks the standings to make sure he knows exactly where his Kings stand.

“Out of the gate we got a tough one to see what we’re made of,” Hield said. “That’s the fun thing about the NBA, man — no easy games. And everybody knows how dangerous we can be. I like our chances, man.”

“I always do; even when we were under .500, I was checking the standings to see where we’re at,” Hield said. “That’s human nature.”

Hield’s claim is important as the leader of a young Kings team, but it’s nothing compared to the Boston Celtics’ Jayson Tatum, who, in just his second season, told reporters yesterday that his team is “going to win the Finals this year. February 16, Jayson Tatum said we’re going to win the Finals this year.” Now that’s going out on a limb, so we’ll see if either player ends up being right, or if this is some motivational BS that doesn’t actually happen.

If I had money to put on either claim, I’m going with Buddy Hield’s, because the Kings are a trendy pick to reach the playoffs and the Celtics aren’t even the best team in the Eastern Conference, so Tatum just seems to be on one here.