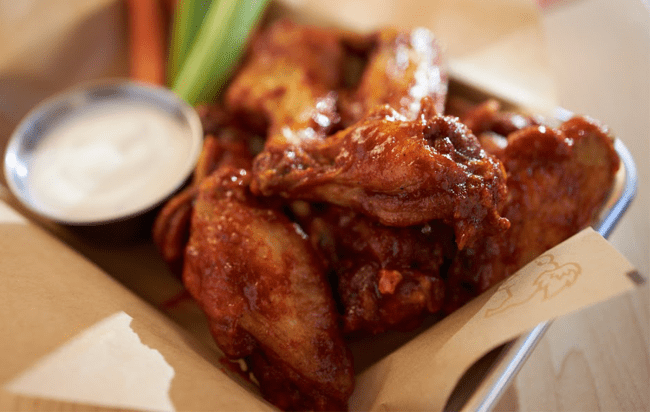 As an undying fan of the antics of Bills Mafia, I was really hoping Buffalo would be able to earn a spot in Super Bowl LV so the supporters who’ve been subjected to decades of misery could watch their team compete for the Lombardi Trophy for the first time since 1993.

Unfortunately, their season came to an end on Sunday after Patrick Mahomes used the AFC Championship Game to remind everyone he’s really, really, really, ridiculously good at football. However, fans of the city’s namesake wings will have some skin in The Big Game courtesy of Buffalo Wild Wings.

A couple of years ago, the kind folks at Buffalo Wild Wings gave fans who had no particular allegiance to the Patriots or the Rams a reason to get emotionally invested in Super Bowl LIII when it promised to give us free wings if the game was tied at the end of regulation. Last year, B-Dubs brought back the overtime offer, but sadly, wing lovers were once again unable to cash in after the Chiefs went on an absolute tear in the fourth corner and walked away with an 11-point victory over the 49ers.

Thankfully, we’ll get yet another shot if what promises to be an epic showdown between Mahomes and Tom Brady isn’t decided by the time the fourth quarter comes to a close, as the chain is bringing back the promotion yet again.

If Kansas City-Tampa Bay goes to overtime, everyone in America gets wings.

If fans in the United States and Canada are ultimately treated to some free football in this year’s Super Bowl, they’ll also get the chance to snag half-a-dozen wings of either the regular or boneless variety from 4-7 P.M. on February 22nd (although you’ll have to stop by a location to grab them, as the offer isn’t available if you get food delivered).

With many brands opting to forgo Super Bowl commercials this year, prop bets are probably going to be the primary form of entertainment for the Rob Lowes of the world who are just hoping for a good, clean game of football. It’s worth noting the championship has only gone to overtime once, and when you consider BetMGM is currently offering +900 odds on the possibility of it happening this year, you might not want to get your hopes up.

However, if you’re ultimately able to take Buffalo Wild Wings up on its offer, I highly suggest going with lemon pepper sauce. You can thank me later.