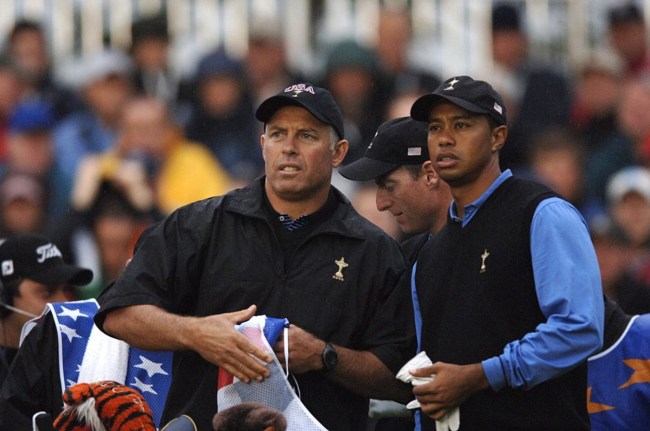 Of all the no-nos a caddie is supposed to avoid, dropping your player’s club into a body water has to be atop the list. It happens to the best of them, though, just ask Tiger Woods’ longtime caddie Steve Williams.

Williams recently joined Evin Priest on the ‘Chasing Majors‘ podcast and shared the hysterical story of when he dropped Woods’ 9-iron into the water.

The moment came during the 2006 Ryder Cup at the K Club in Ireland. Woods and the Americans were torched by Team Europe 18-5 to 9.5 that year with Tiger being one of the few bright spots earning three of five points.

The best memory for Woods and Williams from that Ryder Cup likely had nothing to do with golf, instead, it was the lost 9-iron.

“It was a Par 3, a green that has all water to the front of it and to the right of it. And I’m leaning on Tiger’s club, he’s up there putting, and I’m leaning on this club, and I slip, and I’ve either got to let me go in the water or the club, so I let the club go,” Williams explained.

Williams Had No Plans Of Telling Tiger He Lost The Club

Perhaps the best part of the whole thing was Woods didn’t notice what had happened and Williams had no plans of telling him unit the round was over.

There were only a few holes left in the match, but on the very next hole, Woods had a 9-iron yardage left into the green.

“We go to the next hole, I believe he was playing with Jim Furyk, Tiger’s going to hit his second shot, and it’s the bloody 9-iron,” Williams recalled. “I’m thinking, ‘I just can’t give him the yardage for an 8 or a wedge; it’s a 9, I can’t deviate this one.’”

Woods handled the fact that he was now 9-iron less in stride, saying “you fu–ing clown, only you.”