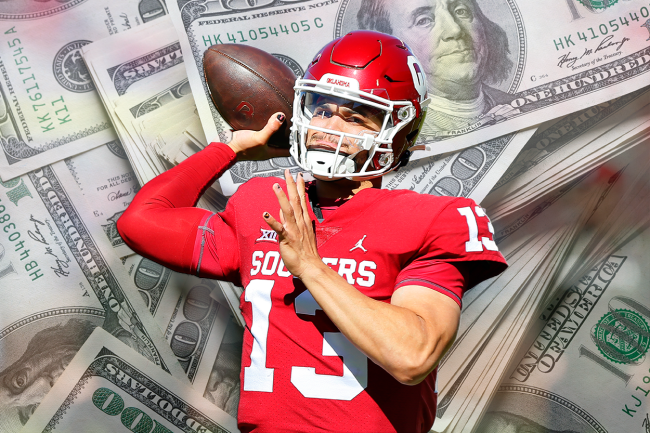 Caleb Williams has been in Los Angeles for less than a month and he is already making huge moves in the NIL space. According to the L.A. Times, the 19-year-old quarterback recently signed his fifth deal for his Name, Image and Likeness, and it’s a huge one.

In less than three weeks with his new program, Williams inked a licensing agreement with Fanatics, announced a major partnership with Beats by Dre, became a part-owner of a modern men’s grooming company, and is helping to launch an alkaline water brand. His most recent partnership may be the most unique, and biggest, yet.

Williams has entered into a long-term agreement with Hawkins Way Capital, a real estate private equity fund based out of Beverly Hills. Hawkins Way manages close to $2 billion (with a B) in assets and although the terms of the deal are not disclosed, it includes annual compensation for USC’s QB1.

Per the L.A. Times, the deal is intended to teach Williams the ropes of the real estate world with the possibility of partnering on future investment opportunities.

According to Ross Walker, a managing partner at Hawkins Way, the two were introduced even before Williams’ freshman year at Oklahoma.

He is hopeful that the opportunity will be mutually beneficial for both parties.

“We’re taking a bet with Caleb and hopefully he crushes it and a lot of good can come from that,” he said to the L.A. Times. “But we legitimately want him to learn and to provide him opportunities. We bring a lot of real estate investments, but we can also be a sounding board for him. He can talk to us. We can give him objective advice. It’s really an investment in this kid.”

Walker spoke more about what Williams gains to learn from his work with Hawkins Way.

“Our plan is to expose him to how our firm operates and how we do business,” he said. “We’ll give him the opportunity to participate in ideas. And also, vice versa, when he gets opportunities presented to him, we can help him understand how to analyze those, and we can participate in those together.”

Longtime real estate developer Lew Wolff was instrumental in the partnership. He is also a partner at Hawkins Way and chairman emeritus of the Oakland Athletics.

Wolff said that he funded the partnership with Williams for “for mentorship purposes.”

“Hopefully he will come out of this as [Tom] Brady or somebody like that,” Wolff said to the L.A. Times. “I want Caleb, when he has time, to learn and have a business when he leaves sports. But hopefully that’ll be a long time from now.”

Walker and Wolff were introduced to Williams and his father last August and they were immediately impressed with the young quarterback and how he carries himself. Now they are are partners on one of the most unique NIL deals across all of college sports.