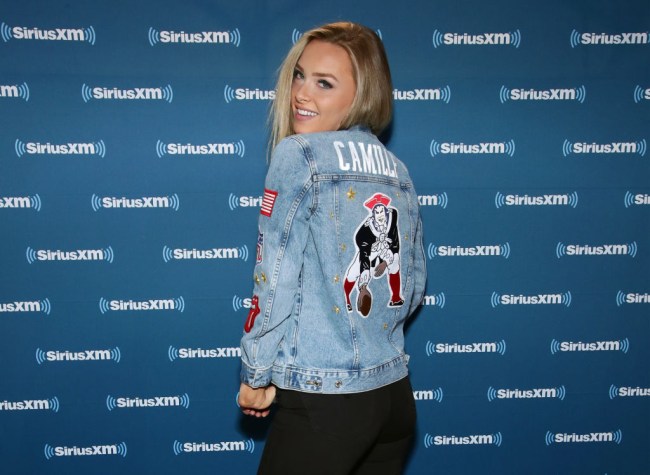 The 26-year-old former Patriots cheerleader recently defended her man against vitriol thrwn his way by Jags cornerback Jalen Ramsey. She said, “Rob’s sexier than you and he’s a better football player than you.”

That’s not for me to decide.

Kostek has made it clear whose corner she’s in and more evidence of that occurred yesterday at Gillette Stadium when her beau’s Patriots were taking on the Houston Texans. Gronk, who finished the game with 7 receptions for 123 yards, hauled in a 21-yard touchdown pass in the first quarter despite being double-teamed by two defenders.

After Gronk scored the first touchdown of the Patriots season, the 29-year-old Pro Bowler broke out into an interesting little butt jiggle dance before executing his iconic spike.

Kostek, who was in a luxury suite at Gillette rocking a Gronk jersey, decided to reenact her boyfriend’s celebratory dance.

There’s no excuse for forgetting the air spike, but good effort nonetheless.

watching you practice is cool, but the end is my favorite part #onfieldkisses #yousweatybutyoucute 💙❤️ shoutout to my sexy photog @jessiejamesdecker 😘 welcome to #PatsNation 🏈