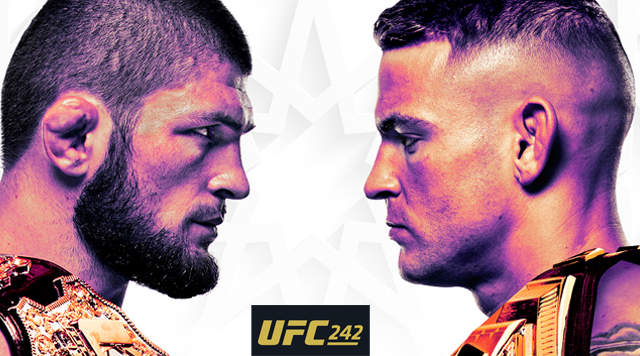 These oddsmakers have absolutely no respect!

Checking out the odds for the UFC 242 Pay Per View on ESPN+, it’s pretty obvious that the bettors are underestimating Dustin “The Diamond” Poirier. How in the world is he listed as a +340 underdog for his title unification bout against Khabib “The Eagle” Nurmagomedov? It’s not like he hasn’t been on one of the most impressive runs in UFC lightweight history of late.

Of course, there are reasons why Khabib is currently a -425 favorite for the UFC 242 Pay Per View main event, but anyone who thinks that “The Eagle” is just going to steamroll Poirier on Saturday, September 7 in Abu Dhabi has got another thing coming.

Sure, Khabib is undefeated at 27-0. Sure, he has some of the most impressive wrestling in mixed martial arts, with a smothering top game to boot. But, have you seen Dustin Poirier of late? The dude has been absolutely lights out since suffering his lone loss at lightweight back in 2016.

Poirier is no fly by night flash in the MMA pan. He’s no fad or flavor of the week. Dustin “The Diamond” is a legitimate threat in the Octagon, and he’s proven that he’s still getting better in all facets in MMA, despite having already completed more than 20 times in the UFC.

A Brazilian Jiu-Jitsu black belt, Poirer has transitioned his focus more in the boxing direction over the last few years, bulking up to increase his power while still maintaining his hand speed. Poirier attacks with constant pressure but cuts angles to deliver punch and kick combinations from all different directions. It’s really something to behold.

Looking at Poirier’s last four fights, all of which earned “The Diamond” fight night bonuses, he’s really found his rhythm as he enters his athletic prime, and he really makes it look easy.

Whether it’s busting Anthony Pettis and forcing the TKO by broken ribs or knocking Justin Gaethje out on the feet, Poirier is a true gunslinger, dishing out lefts and rights like an outlaw with a pair of matching pistols.

And by the time he smoked former UFC champion Eddie Alvarez in a heated rematch of a fight that ended in a disqualification, Poirier was well on his way to becoming the sheriff of the lightweight division.

From there, things got a little complicated for Poirier, who threatened to sit on the sidelines until the UFC offered him a title fight. There was, briefly, a fight scheduled against Nate Diaz at Madison Square Garden, but the bout never materialized. Again, Poirier was without a dance partner and on the outside of the title picture looking in.

Then a bit of fate stepped in.

With the UFC offering an interim lightweight title while Khabib was suspended for inciting the brawl after UFC 229, Poirier was called upon when Tony Ferguson was unable to accept the bout for personal reasons.

Poirier would finally be fighting for a UFC title, and to make matters even better, he was facing Max Holloway, a guy he already beat many years ago.

The Poirier vs. Holloway fight at UFC 236 was a phenomenal bout, and really demonstrated Poirier’s mettle. Despite winning the first few rounds, “The Diamond” was unable to finish Holloway, and the fight ended up being very, very close.

And this explains exactly how and why Dustin Poirier is a championship-caliber fighter who has the potential to become the first combatant to beat Khabib. Sure, it’s a longshot, but Poirier doesn’t just have the skills, the boxing, the jiu-jitsu, the wrestling, and the cardio. He has the intangibles, the heart, the fight IQ, the attitude, the motivation. Poirier is hitting his stride at the perfect time, and it’s completely possible that he’s saving his best performance for the UFC 242 Pay Per View main event on ESPN+.

A win over Khabib would go down as one of the UFC’s all-time greatest upsets. But Poirier probably doesn’t even believe it should be considered an upset. He’s going into the fight with total belief that he can not only beat Nurmagomedov but that he can finish him. And why not? Khabib has likely never been hit by someone who throws as hard as Poirier.

The real question is can Poirier keep the fight on the feet? That’s something that 27 people have tried in the past, and every single one has failed to take Khabib out of his element of dominant wrestling.

As usual, there’s only one way to find out, and that’s to order the PPV on ESPN+. No doubt fight fans will throw down for the early afternoon card (11 a.m. PST / 2 p.m. EST), which is a welcome change from the regular Saturday night combat sports routine.

This is a big one, so tune in to see if Dustin Poirier can become the first person to beat Khabib Nurmagomedov and unify the UFC lightweight title.