Cardinals, Seahawks, Raiders And Rams Fans Put On Quite A Card Of Brawls In The Stands During Week 17 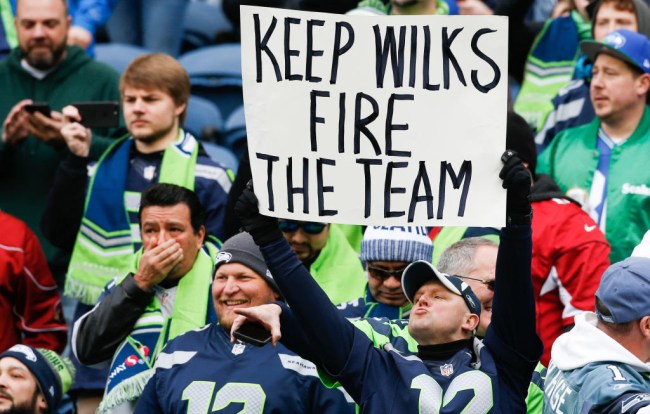 I suppose it is only fitting that the season closed out this way. Hardly a week has gone by this year without one sort of epic brawl taking place at games between various NFL fans.

We had the ultra-bizarre Packers-Vikings fight that resulted in Packers fan submitting to a chokehold. Then there was the middle-aged Jaguars fan who KO’d a Texans fans with a whopper of a sucker punch. Plus, we also had the very violent Steelers fan vs. Steelers fan fight that gave us the headbutt from hell.

In Week 17, the Seahawks put a stamp on their season with a hard-fought win over the Cardinals, cementing Arizona’s spot for the number one pick in the 2019 NFL Draft.

However, it was a Cardinals fan who put his stamp on the face of a Seahawks fan with a vicious right hand, resulting in a bloody nose (if not more) for Seattle fan. (Not sure why there was one fan saying he punched a girl. That must have come earlier.)

Then, down the road in Los Angeles, a Raiders fan was in attendance at the Rams vs. 49ers game (because of course he was), that somehow ended up with some Rams fan on Rams fan violence.

Can’t wait to see who comes out on top, fanwise, in the playoffs.