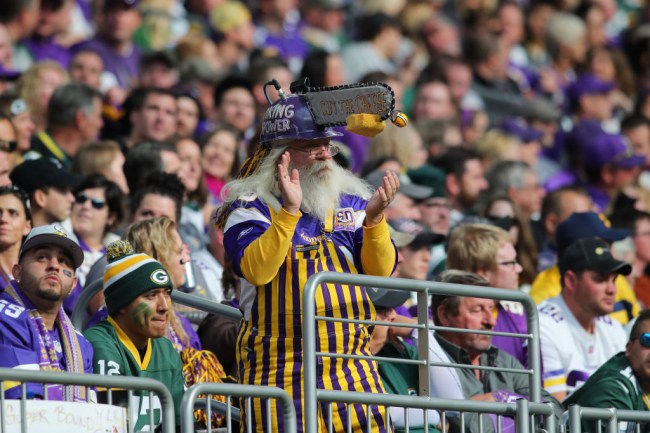 Opposing fan fights have been a part of sports since the days of the leather helmet and will prosper into the days when players wear no helmets and replace pads with flags around a waistband. Almost always excessive cheering is the motive, alcohol is the catalyst, and the man in the higher row wins because he can just push his opponent down the stadium seating.

But, during a Sunday Night Football matchup featuring the Green Bay Packers and the Minnesota Vikings at U.S. Bank Stadium, everything we thought we knew about stadium fights was brought into question–from the fights to the resolution.

It all started when an elderly Vikings fan called out a Packers fan wearing pajama pants for cheering too loudly (standard). Old man River can be heard saying “I’m [unclear] years old and I’m going to fucking tear you apart.” That’s when things escalated.

No midwestern values in this rivalry! pic.twitter.com/IYUNrVqDuX

I’ve never seen a fight de-escalate so quickly. A chokehold into a cheer. What a turnaround.

Here are some sage reactions.

Lol gotta love his face the moment he realizes he is being filmed 😂 pic.twitter.com/zh88ICZ2XZ

“I’m sorry. I used to be much stronger.” pic.twitter.com/FILILrNTOt

If that guy did that at Lambeau he’d lose the season tickets it took 3 decades to get.

Soon as he tried to wrap my neck. pic.twitter.com/9bK5eXeg3J

I need to know how these fans were able to co-exist for the rest of the game. Did they make up? Was there complete silence? Bury that hatchet over a beer? So many questions. Not enough answers.