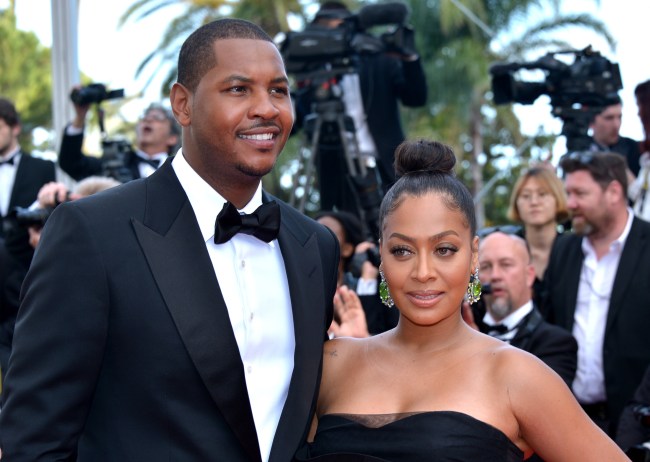 Carmelo Anthony’s just casually hanging out right now, hoping that another team takes a chance on him and adds the 10-time NBA All-Star to their roster as contenders look for bench players. After being released by the Houston Rockets early this season — which ended an awful experiment that should’ve never even happened — Melo’s chances or rejoining the Association this year don’t look too promising, no matter how many times we have to hear about the rumors of him going to the Lakers.

While his NBA career may be over — or at least on hold, for now — Carmelo Anthony’s personal life seems to be back in order a bit. Well, that’s if you trust Instagram.

Many of us probably remember that Carmelo not only cheated on his celebrity wife, La La Anthony — a former MTV VJ and a New York Times best-selling author — but the baller even got the woman he cheated with pregnant, causing a separation between the Anthony’s. In the past year or so, though, the two have seemed to try and reconcile.

The most recent example of Carmelo Anthony and his estranged wife being back together came yesterday, when La La took to social media to wish her man a happy Valentine’s Day; but not without a little warning. Take a look at what she wrote in the caption while showing her man some love.

In one respect, it’s pretty nice and sweet and mushy and all that. But then you get to the middle part and, damn, La La isn’t f*cking around when it comes to dealing with that kind of drama again, so Carmelo Anthony better not mess up.

Even if you’re not a Carmelo Anthony fan, hopefully, you can be happy that the guy has gotten his personal live back in check; because the past couple years or so have seemed like hell for the dude. And, even if Melo never plays another game in the NBA, at least he’s got that going for him — just as long as he doesn’t f*ck up again.