Is Carmelo Anthony’s NBA Career Over? NBA Execs Sure Think So 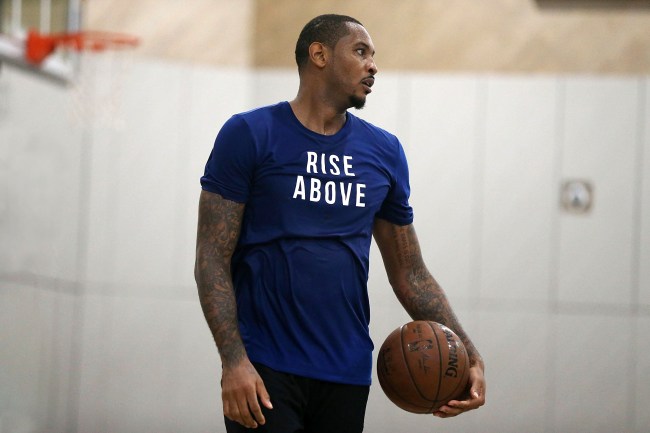 There was a time when Carmelo Anthony was mentioned with names like LeBron James, Chris Bosh, Dwyane Wade and others as being one of the best players in the NBA. Boy, doesn’t that seem like a long time ago now? After being traded by the New York Knicks prior to last season, Melo has bounced around with a few different teams, all of which have led to him currently being out of the league.

In fact, things have gotten so bad for Carmelo Anthony that, as of a few weeks ago, the team with the best odds to sign him wasn’t even in the NBA, it was in China! Can you believe that? It’s actually sad to see how his career has completely fizzled out.

And, as if things couldn’t get any worse for the 10-time All-Star, Brian Windhorst is reporting that, according to NBA front office executives, Carmelo Anthony’s NBA days are over, with multiple sources telling Windy that no team will give the 34-year-old a chance, and saying that he may “have played his last game” in the league, per Bleacher Report. Here’s what Rachel Nichols tweeted out about the news.

If true, that would be a sad ending to a career that, more than likely, will end with Carmelo Anthony in the Hall of Fame. Unfortunately, given his decline in recent years — as well as the 10-game sample size with the Houston Rockets this year that has led to the franchise and the player agreeing to “part ways,” it’s hard to see a team wanting Melo at all.

As the 20th leading scorer in NBA history, Carmelo Anthony could probably still help a team’s second unit as a bulk scorer, assuming he’d swallow his pride and come off the bench. Unfortunately, Melo’s history doesn’t prove he would assume such a role, which is probably why so many execs think his NBA days are done.