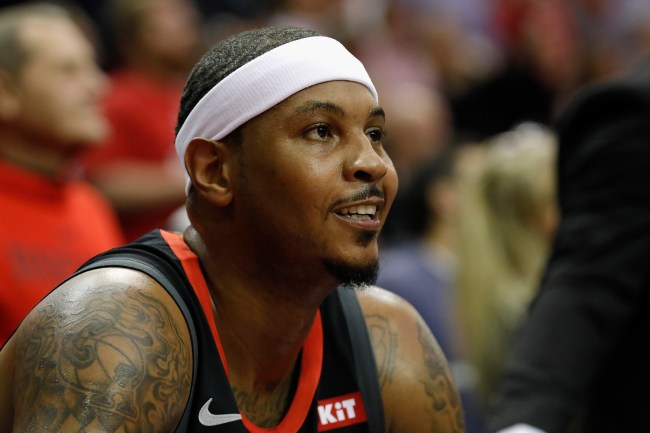 Free agent hooper Carmelo Anthony has really fallen hard in the past few years. Well, I take that back, ever since he forced himself out of Denver years ago to head to the New York Knicks, Melo hasn’t really been worth all the hype, seemingly finding himself in a bunch of dysfunctional situations year after year.

Once his tenure with the Knicks ended, he went on to Oklahoma City to play for the Thunder, he didn’t perform, got traded to the Hawks for about 48 hours, then ended up with the Houston Rockets for 10 games. But the Rockets had no use for him, and now he finds himself out of the league and on the hunt for a new team. Will that franchise come calling? Possibly. Will it be from an NBA team? Uh, possibly not.

In fact, if you ask the Vegas oddsmakers, the team with the best odds to sign Carmelo Anthony doesn’t even reside on this continent. That’s because, per BetOnline.ag, Anthony’s next stop could be in China, where the gambling site puts odds at +150 that the 10-time NBA All-Star to go.

At @betonline_ag, there are odds on Carmelo Anthony's next team and….. yeah

Maybe it’s just me, but this sounds outrageous to think that Carmelo Anthony has dropped this far in NBA circles. Sure, the guy has aged like a piece of bread that was left out to get moldy for weeks, but is he really that terrible that he can’t help a team off the bench? Maybe it didn’t work for the Houston Rockets, but there has to be another NBA team worth giving him a shot, right? Problem is, if recent history’s any indication, Melo will probably brick that shot.

Anyway, other NBA stars have gone to China and saw great success — like Stephon Marbury and Tracy McGrady, among others — but Carmelo Anthony just seems like he’s above all that, right? For Christ’s sake, the guy is No. 19 on the NBA all-time scoring list and has an ego the size of the Pacific Ocean, so I just can’t see him swallowing his pride and giving up on playing for an NBA team again.