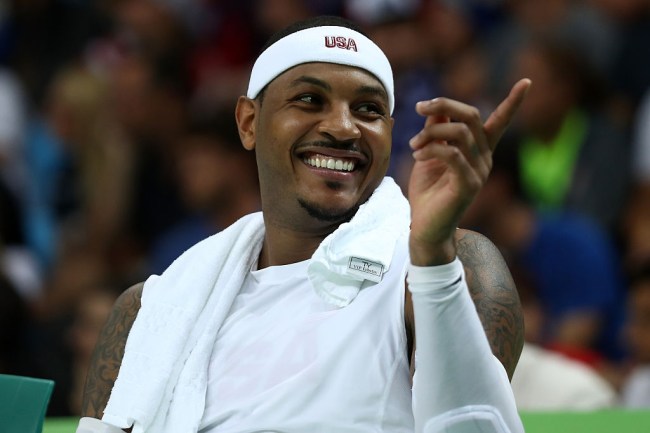 Carmelo Anthony started off the most recent NBA season as a member of the Rockets but it quickly became clear he wasn’t meshing with the franchise and it didn’t take long for the organization to announce they’d be parting ways.

In January, Melo was traded to (and quickly waived by) the Bulls. After failing to find a new home, he finished the year as a free agent and there was plenty of speculation that we might never see him in the league again.

It appeared the Knicks were interested in bringing him back to New York but the plan fell through after they handled the free agency period in the most Knicks way possible by doing virtually nothing of note.

Shortly after that news broke, Anthony chatted with Stephen A. Smith and revealed he considered stepping away from the sport but would be willing to team up with LeBron James and Anthony Davis in Los Angeles. However, it doesn’t appear the Lakers have any interest (nor does Team USA).

However, on Wednesday, we were treated to a bit of a twist when a report surfaced that Anthony could join forces with another killer duo in the form of Kyrie Irving and Kevin Durant, as he’s apparently been practicing with members of the Nets out in L.A.

With that said, I think we can all agree the dude deserves a farewell tour and the Nets seem like a pretty solid team to do it with—assuming he’s able to hold his own.