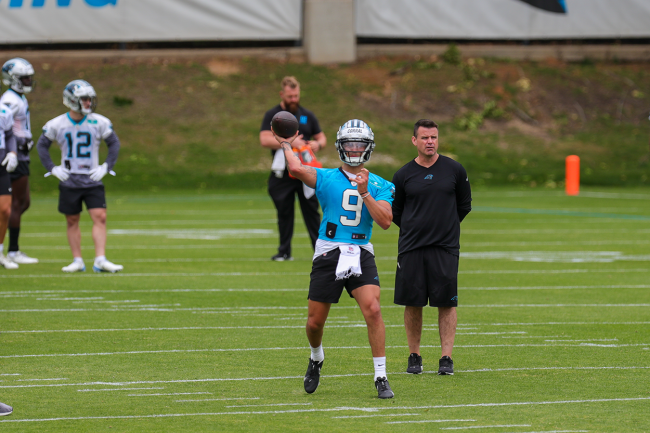 The Carolina Panthers enter the summer with three quarterbacks on the roster. P.J. Walker is the 27-year-old journeyman, Sam Darnold is the 24-year-old incumbent starter after being traded from the Jets and Matt Corral is the 23-year-old rookie out of Ole Miss.

There is also a chance that the team could add another signal-caller to the mix. Carolina reportedly remains open to the idea of trading for one of two quarterbacks who are firmly on the block.

However, for that to happen, the team is looking for one thing in particular— money. Well, in a sense, a lack thereof. And it’s makes a trade a lot less likely.

According to Jonathan Alexander of the Charlotte Observer, the Panthers have had conversations with the Browns about the idea of sending Baker Mayfield south. Carolina wants Cleveland to pay something of $13/14 million of Mayfield’s $18.9 million guaranteed salary, but Cleveland is not interested in that number.

As a result, Corral, Walker and Darnold are set to battle it out this summer. Corral could win the job this summer, but head coach Matt Rhule has said that he would like his rookie to sit for a year and learn before playing so as not to “ruin him,” and added that Darnold gives his team the best chance to win this year.

The Carolina Panthers are happy with their quarterback room right now.

Before the top-three offensive tackles fell out of the top-five picks of the NFL Draft, the team considered taking Corral at six. They got him in the third round.

The team also considered Sam Howell, according to Alexander. It did not give serious consideration to Kenny Pickett nor Malik Willis.

As things currently stand, Carolina plans to sit put. Unless Garoppolo or Mayfield become available with a cheaper price tag.

Should the Browns decide to cut Mayfield, the Panthers would be interested. Same thing goes for if they agree to pay more of his contract.

Garoppolo is the less-likely option. He is coming off of shoulder surgery and his $26.9 million contract is expensive.

In addition, per Alexander, Carolina is also considering the idea of bringing back Cam Newton. For that to happen, he would not enter camp as the starter and would have to agree to less money.

With a healthy Christian McCaffrey coming back and the offensive line seemingly fixed, there is a lot of hope in Charlotte. But the quarterback situation, without a definitive, proven veteran, remains a position that Rhule and Fitterer want to upgrade if possible.

If not, they’re confident enough where they are.