The Carolina Panthers Are Still Interested In A Veteran QB, Just Not That Makes Them Better 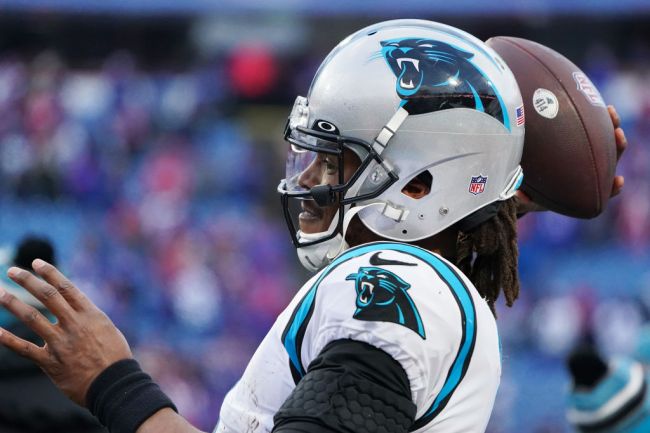 The quarterback situation for the Carolina Panthers doesn’t look so great heading into the 2022 NFL season. Sam Darnold is currently expected to be the starter. PJ Walker is his backup. Matt Corral is expected to eventually start, but it probably won’t be soon.

The Panthers had been looking for a way to remedy this throughout the offseason, but haven’t quite found the fix yet. It seems that instead of actually fixing the problem, they may instead be interested in just adding to it.

Their GM spoke with Pro Football Talk today and revealed that the Panthers are still in contact with Cam Newton about a potential return.

The Panthers and Cam Newton remain in contact, and a return to the roster remains possible. https://t.co/sn1kWZ3MJc

“I think we’re still having thoughts. We have to see how this works out here throughout the spring. I just happened to be up at the [Kentucky] Derby last weekend and Cam was up there. We’re texting a little bit. The lines of communication are open. I know Coach Rhule has spoken with him. We are going to have a discussion at some point but we’re just not quite there yet, but we’ll see how it goes. The more competition we have at that position the better.”

Bringing Cam Newton back is a move that I really just wouldn’t understand. Cam hasn’t looked good throwing the ball in the last two seasons and looked particularly bad in his 5 starts last year.

He went 0-5 as the team’s starter and that included a home loss to a bad Falcons team and a loss to the Dolphins where he went 5/21 throwing the football. Bringing Cam back doesn’t help the team win and would just give fans something to complain about if Sam Darnold isn’t playing well and Cam is still on the bench.

The Panthers already have PJ Walker to back Darnold up early in the year and could easily move on to Matt Corral late in the season if they aren’t competing. Bringing in a veteran that won’t help you win, but puts somebody else over Corral on the depth chart just doesn’t make sense.

There is only one veteran QB the Panthers should be interested in right now and he is currently on the roster of the team they play against in week 1.