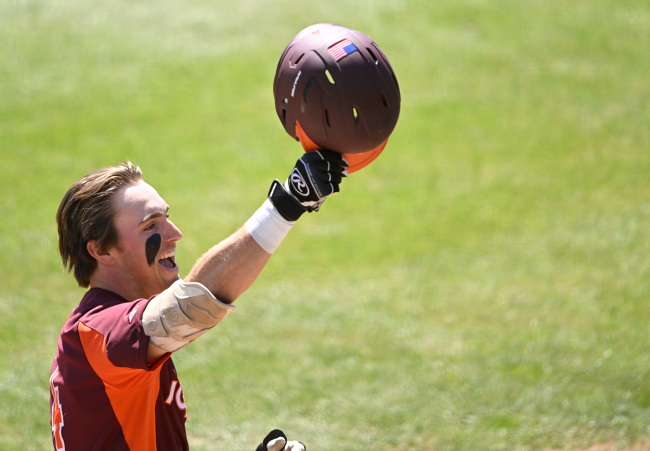 Virginia Tech baseball earned the right to have its college baseball postseason run through Blacksburg. The Hokies went 40-11 in the regular season and earned the No. 4 overall national seed in the NCAA Tournament.

As a result, up until the College World Series in Omaha, the Regional and Super Regional round were to be played on their home field, barring that they did not lose. Well, Virginia Tech won its Regional and earned a host for the Super Regional, welcoming Oklahoma to the Old Dominion.

However, as the best-of-three game series got underway, one important component of the Hokies’ swagger was missing— the home run hammer. After making its debut in 2021, it returned in 2022 and is much like a turnover prop in football.

After hitting a home run, the player who did so is met with a sledgehammer upon returning to the dugout. The dinger-hitter then proceeds to swing the hammer, and smash it into the turf, while the rest of the team jumps into the air and yells “BOOM!”

It’s absolutely electric and there is a legitimate case to be made that it’s the best prop in all of sports. But it’s not on the field this weekend.

The NCAA decided that Virginia Tech’s home run hammer would not be allowed on the field during the Super Regional.

Statement from the NCAA on Virginia Tech not being able to use the hammer. https://t.co/b9dKLTxCrT pic.twitter.com/68bIHjzbru

Thus, despite earning home field advantage, the Hokies cannot partake in their normal celebration that was allowed all season up until now. They are using an “air hammer” instead.

Meanwhile, other teams around the country are allowed to use their props. Like Tennessee and the Volunteers’ fur coat. Totally allowed. Makes sense, right?

Well, it doesn’t. At all. And the Hokies, particularly freshman Carson Demartini, aren’t happy about the ruling.

After beating Oklahoma in Game 2 and forcing a winner-take-all Game 3, Demartini went full scorched earth on the NCAA. He really teed off, and rightfully so.

Okay I may have been paraphrasing just a bit… Here's what @CarsonDemartini actually said… pic.twitter.com/uTH95bOfXT

The NCAA continues to be the worst. Let kids be kids. Let the boys play loud.